Win Stuff with The Best Years 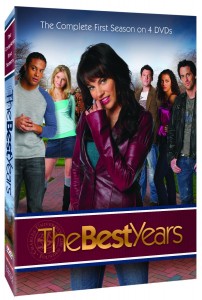 Today we have a copy of The Best Years: The Complete First Season on DVD for one lucky Gunaxin reader. First we’ll find out a bit about the prize:

New friends, new beginnings and new loves all come together in one of the most compelling teen dramas on TV. The Best Years, the hit teen series from The N and CanWest, captures the highs and lows of campus life through the eyes of Samantha Best (Charity Shea, Alpha Dog), an orphan beginning her collegiate career at one of the country’s most prestigious universities. As fans gear up for the show’s eagerly-awaited season two premiere (premiering April 3rd), E1 Entertainment proudly presents the DVD debut of The Best Years: The Complete First Season in a fully-loaded 4-disc set, containing all 13 season one episodes plus over 70 minutes of exclusive extras. Packed with behind-the-scenes footage, cast interviews and more, this must-own collection arrived in stores on Tuesday, March 10 for the suggested retail price of $49.98 srp.

Not a bad prize if you happen to like college chicks on Canadian television, and who doesn’t?

The Best Years follows Samantha Best as she starts her freshman year at the prestigious Charles University in Boston. Samantha has been shuffled through the foster care system her entire life and is finally looking forward to a future of new opportunities and friendships. She’ll have to contend with the ins and outs of college and mingle with a new world of “frenemies” as she struggles to find her own identity. Along the way she will meet new roommate Kathryn Klarner, (Jennifer Miller, Lucky Number Slevin), a rich socialite from one of the most prominent families in the mid-west; Dawn Vargas (Athena Karkanis, Saw IV), a child actor who has traded in Hollywood for college; and Devon Sylver (Brandon Jay McLaren, She’s the Man), a fellow scholarship recipient and star basketball player who has caught her eye. With her new dysfunctional family and a part-time job at Boston’s hot spot, Colony, Samantha must face the excitement and pressures of college life. It’s going to be a year to remember.

Winning the prizes will be really simple. On Friday March 20th, we will select 1 winner from our Facebook group. In the future we will have additional contests, and being a member of this group will make you eligible for those prizes as well. Good luck, and remember if you don’t win, go buy it.