Win Stuff with ‘The Cleaner’

“The Cleaner,” starring Benjamin Bratt, Grace Park (formerly of Battlerstar Galactica Fame), Amy Price-Francis and Esteban Powell premieres tonight, Tuesday, June 23 at 10PM ET/PT on A&E Network. In order to celebrate the season premiere, we have some prize packs to give away to Gunaxin readers, but first, lets take a look at the show. 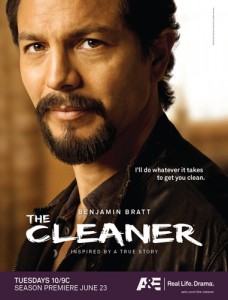 Inspired by the true story of real life “extreme interventionist” Warren Boyd, “The Cleaner” stars Bratt as William Banks, a recovering addict who must balance his unwavering dedication to helping others get clean with an increasingly rocky personal life and the ghosts of his addictions. Banks and his teammates Akani Cuesta (Park) and Arnie Swenton (Powell) employ an unconventional – and often by any means necessary – approach to getting addicts and those who surround them to realize they’ve reached rock-bottom and help them begin the process of recovery. With every success and failure, William wrestles with his commitment to his work and his love for his wife Melissa (Price-Francis) and their children through an unusual relationship with God. Whoopi Goldberg guest stars in the series premiere, “Hello America,” as William’s (Bratt) former sponsor who resurfaces when an addict he is called to help is one she currently sponsors. Visit the official site for more information and to view exclusive content. Become a fan of The Cleaner on Facebook!

To celebrate the season premiere, we have two prize packages that include: