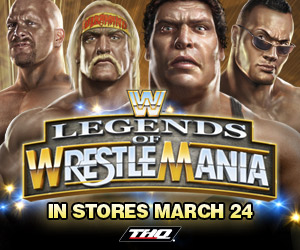 When we posted out article on the Golden Age of Wrestling, we were alerted to the fact that a new video game would be coming out, WWE Legends of WrestleMania, in honor of the 25th Anniversary of the event. Well as luck would have it, we now have 3 copies to give away as part of a Wrestlemania Prize Pack. The Pack also includes a Wrestlemania T-Shit and Wristband. That way you can look like “The Ultimate Dork” while you play what looks to be a pretty sweet game. 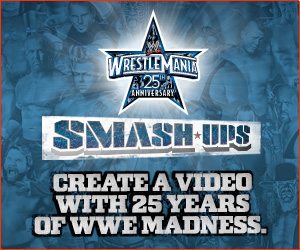 This is all brought to you by the folks at the WWE who are introducing a new website called WWE Smash Ups. The way I understand this thing, the Smash Ups let people create their own WWE videos using an almost endless library of content. They provide you with everything from stuff that happened as recently as last week on Raw to stuff from the Hogan era and earlier with classic WrestleMania footage. So this thing is pretty badass. On top of that, the best created video will get featured on WWE.com and will be awarded $5,000!

Check out this smash-up of the Undertaker for an example of what you can create:

This prize pack is pretty damn nice, so you are going to have to work a little bit to win.
There are three steps :
* Go to wwe.com/smashups and register to make a video smash-up.
* Join our Facebook Group
* Share a link to your Smash Up creation to our Facebook Group

Here is an instructional video to get you started:

The 25th Anniversary Edition of Wrestlemania airs on Tonight, 7e/4p, only on Pay Per View, so you’ll have until tomorrow to post your link to the Facebook group, where we will select our three favorites for the prize packs. Good luck, and we look forward to seeing what you can create.

The Horror that is Synchronized Swimming