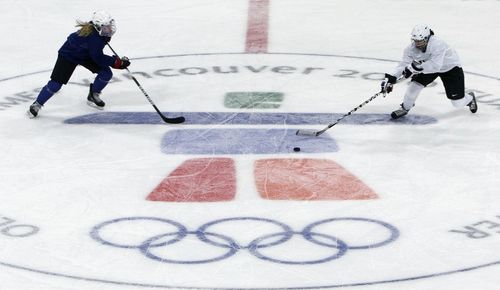 Sadly, this Primer does not talk about women’s hockey

For a full preview of the Winter Olympic Hockey Tournament, check out the latest episode of our podcast, The Gunaxin Show.

We are just one day away from the opening ceremonies of the XXI Olympic Winter Games hosted in Vancouver, British Columbia, Canada. As one might imagine, the heat is on Canada. In two prior times hosting the Olympics (1976 Summer Olympics in Montreal, and the 1988 Winter Olympics in Calgary), Canada has come away with a grand total of zero gold medals. Zip. Nada. Zilch.

People expect differently this time around. In fact, many are ambitiously predicting that the host nation will stand atop the medals table, winning plenty of golds, silvers, and bronzes. In short, expectations are quite high. And while that sentiment runs throughout Canada’s Olympic athletes, no team faces higher expectations than the Men’s Ice Hockey team. 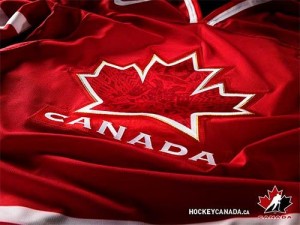 Long considered the nation with the most talent, Canada has only won gold once in the last 58 years. That’s not the kind of results you want when you consider yourself the birthplace of the game. Granted, prior poor finishes can be attributed to the absence of Canada’s best players. But since NHLers have competed in the games (since 1998), Canada’s only medaled once (gold in 2002). Most recently it is coming off an embarrassing 7th place finish (including a loss to Switzerland). And the country’s recent loss in the Ice Hockey World Junior Championship on home soil to the United States does not help matters. But the talent remains, and Canada has again selected an all-star studded roster. Everyone expects gold, particularly with home ice advantage. You get the feeling that no matter what the rest of the country does during the Games, the absence of a Men’s Ice Hockey gold medal may end up making the experience a disappointment north of the border. 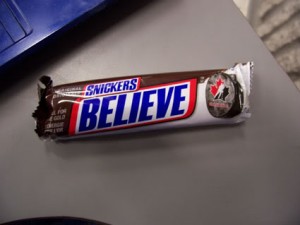 Snickers wants me to believe in Canadian Hockey, and I do believe it does exist (as opposed to the Tooth Fairy)

So it’s no shock that any discussion of the upcoming hockey tournament begins and ends with Canada. If you tune in to the games, you’ll be bombarded with discussions on team Canada rivaling that of Brett Favre in NFL circles. Even Snickers has gotten into the act. But if you can get past that talk, the on ice action should be quite excellent.

We here at Gunaxin took a look at what the big seven teams might have been over a year ago. The players selected back then were meant to represent a best case scenario for each nation. And while politics, injuries, and overall changes in the level of play have made the final rosters look a little different, the bulk of the analysis remains the same. Canada is the favorite, Russia and Sweden are right behind, and the other major nations are hanging around in the background. That’s why the predictions really haven’t changed. As an example, here is what BetUs places the latest odds at (Sorry Swiss fans):

One has to wager $200 just win $100 back by betting on Canada. Not the greatest odds. But Finland and the Czech Republic offer decent odds, and those two countries medaled in Torino.

What to expect in 2010? For one, a different format has been unveiled this year. Less round robin games (three down from five) will serve to keep players fresher and appease the NHL. The winner of each group, plus the top runner-up will advance directly to the quarterfinals. The others countries will have to play a one-game playoff to join them in the final eight. And the rink has shrunk to NHL-size standards in a money saving choice. Goodbye wide-open international ice, but hello to superstar Sidney Crosby, making his Olympic debut. Some consider Crosby to be the “face of the Games,” given his nationality, his sport, and general high profile status. New faces are the norm as many nations have skewed younger in their selections, particularly Team USA (see Kane, Patrick and Parise, Zach as two examples). The hope is that young blood will revitalize the Americans, whose previous veteran teams often disappointed. But the real fun will be watching the countries battle it out in a winner takes all single elimination knockout.

The March Madness style tournament will see big name teams battle it out, with only one allowed to advance. One bad game and you are sent home. As for what to look for, remember that the past two champions (Sweden and Canada) have benefited from soft draws. In 2006, Sweden defeated Switzerland, the Czech Republic, and Finland (no Canada or Russia) en route to gold. In 2002, Canada bested Finland, Belarus, and the United States (no Sweden, Czech Republic, or  Russia). Sometimes it IS the luck of the draw.

Also remember that since the NHL has participated in the Olympics, no country has managed to even return to the Gold Medal game. Three finals, 6 nations. That will almost certainly change in Vancouver. Coincidentally, each preliminary Group features the two finalists from a given year, so on February 21st there will be a rematch of each of the last three gold-medal games. That day is also the final day of group play, meaning the group winners (and the byes) will likely be determined by these games. I think the overall lesson here is that there are no guarantees. Canada may be the betting favorite, Sweden may be the defending Olympic champion, and Russia may be the two-time defending world champion, but all could lose. As a fan, that leads to some exciting hockey. And if you’re not a fan, you might just become one.

For an even more detailed look at Olympic Hockey, check out Episode #5 of The Gunaxin Show where we preview the entire tournament.