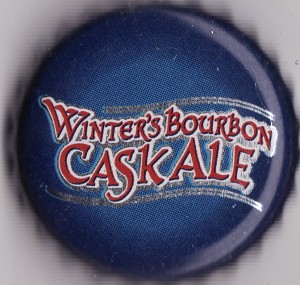 Information: (Site) “During even the coldest of weather, warm up to the smooth, robust taste of our Winter’s Bourbon Cask Ale. Full of rich aromas that you find in the winter months, hints of vanilla and flavorful hops, this is a beer that is great for pouring into a large tulip glass and enjoying with friends around a fireplace.“

I’m not sure when exactly it happened -at least a few years ago- but it seems Michelob has lapped its ‘big beer’ brethren to become one of the more premier brewers around. Miller and Bud can introduce their ‘triple hops’ this and ‘golden wheat’ that, but neither have really taken the reigns and become what a real brewer can be: diverse. Michelob now offers Porters, Pale Ales, Marzens, and Dunkels to name but a few. And, beyond that, they’ve expanded into the Seasonal fare as well with the selection I have today: Winter’s Bourbon Cask Ale. I have to say I’m impressed at not only their vast array of choices, but their ability to keep them inexpensive and easy to acquire. Cheers to Mick!

The pour is a nice golden amber with a frothy white crown that settles into a halo within a minute. It has a clean crisp nose with hints of vanilla and brown sugar. There is definitely a ‘Holiday’ aroma to it that even before the first sip reminds me of Holidays.

The first sip is bright and alive with a slight cranberry note, mildly bitter and fruity hops, and a very smooth and oaky mouth-feel. It has hints of the barrels it has been brewed in giving it a more wine-like appeal. After a few more sips it becomes apparent that there are sweet vanilla notes, anise hints, and even a woody throat that matches the oaky flavor very nicely. I’m very impressed with the number of differing flavors that are going on here. No, it’s not quite the magic that so many of the micro-brews can offer, since it is Michelob, and it is a ‘big beer’ company, but that fact does surprisingly little to take away from its appeal. It’s a very nice beer and it would go remarkably well with a sea food stew, or even a roasted goose (thinking obscure Holiday fare, here). Worth a try, for sure.