Apparently, no one told 23-year-old Wisconsin resident Kiriko Masasi that Burnout was just a popular video game franchise, and not real life.  We’re not sure when he first realized this little fact, but we’re guessing it was right around the time he noticed he wasn’t getting bonus points for crashing into other cars in bitchin’ slow motion action sequences. 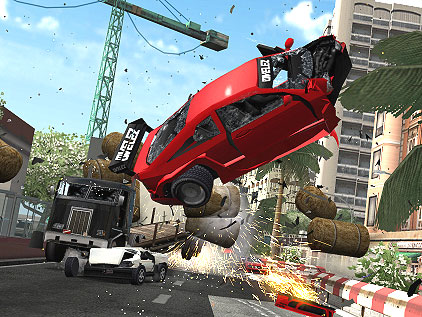 Who knew it needed a disclaimer to NOT try this at home?

You might have heard about it already, but Masasi is the guy who racked up 12 driving citations in only seven minutes, crashing his car a total of four times in the process.  We’re not sure, but we’re thinking 12 citations in such a short span might be a world record, so if that’s what Masasi was going for then kudos, mission accomplished.

So how did he manage this little feat previously only seen in video games meant to teach children exactly now not to drive?

[He] crashed his 1996 Lincoln into a guardrail, a traffic standard, and five vehicles.  In the final crash, he hit three cars head-on and suffered life-threatening injuries.  All of the crashes happened in just four miles.

Now, we know what you’re wondering, and while no charges have been filed, it appears that yes, he was drunk off his ass.  He’s also now in fair condition and the only other person injured has been released from the hospital.  It isn’t yet known if these vehicular shenanigans enabled him to earn a crapload of stunt points and set a new high score.