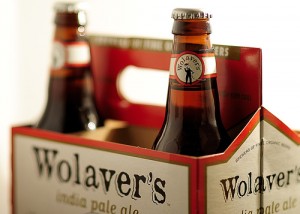 Label Info: “Since 1997 Robert and Morgan Wolaver have combined their passion for exceptional ales with their belief in the benefits of organic farming to create Wolavers: superb handcrafted ales with only the finest organic barley and hos grown in small, independent farms.” Web Info: “Made with a generous amount of hops to produce the classic IPA. Crisp and clean, with a delicious hop spiciness and subtle malt balance. A strong beer, great with spicy foods and for those who enjoy a good, full-flavored, well hopped beer.”

Fortunately, of late, my aversion to IPA’s has been halted specifically by the beers from Otter Creek and Wolaver’s. For me, it has always been about the lingering and often uncomfortable bitterness, but the folks at this combined brewery have certainly stayed my distaste with their wonderful recipes. This beer smells crisp, it positively explodes with the scents of the farm: grass, wheat, open air… it’s like ‘down home’ in a bottle. The head is nice and lacey, it leaves behind a little bit of etching as you sip, which brings me right along to the flavor.

The taste is bright and alive with those clean citrusy notes; the delicious bitterness of these special hops, and indeed a sweetness from maybe a touch of honey. Yes, it’s unmistakably an IPA, but for a second time with this brewery, I am taken aback at its difference and far better palatability compared to other ales of its caliber. Treating it like a wine -and as I’ve stated time and again, there is no reason not to- opens up even more of this beers amazing complexity of tastes: light barley, tasty maltiness, and, of course, the requisite hops that lend their bitterness, yet not obtrusively so. This is such a very nice specimen. This beer would certainly go along with a nice fowl meal, I’d even say pair it with a Thanksgiving dinner, it would just match perfectly. I am certainly on board with IPA’s if they all could be this good.