Sports > Football > Wonderlic Scores Leaked, Does it Even Matter?

Wonderlic Scores Leaked, Does it Even Matter?

The NFL draft is an interesting beast. Evey year fans and front office executives make the decision of who to add to their football team. Visit any football message board and you’ll inevitably see a number of Mock Drafts and all sorts of opinions on who the home team should select. And I get the excitement, as I fall prey to it as well. The offseason is the one time where talent gets added and every NFL fan besides those of the Detroit Lions can drink the Kool-Aid and dream of the best case scenario where everyone stays healthy and the draft picks pan out to produce a playoff contender. It fills fans hopes with the excitement and potential of the unknown. The latest first round draft pick could very well be the next Hall of Famer.

Of course, in reality the Draft amounts to little more than an enormous crapshoot. Oh sure, many people pretend they know who will be good. But even a guy like Mel Kiper, Jr. who dedicates most of the year to figuring out the puzzle is wrong a lot of the time. NFL front office executives are wrong a lot of the time. Guys like Wes Welker and Antonio Gates go undrafted, while Charles Rogers and Akili Smith go in the top 3 picks. The Patriots have managed to unearth Tom Brady and Matt Cassel in the 6th and 7th rounds, where as the San Francisco 49ers have spent first round picks on Jim Druckenmiller and Alex Smith in the last dozen years. If the experts are just shooting in the dark, that makes the opinions of the local message board poster even less trustworthy. He’s often just regurgitating the same lines faulty experts put forth. 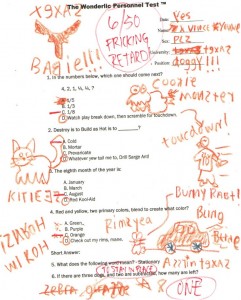 At least all the various opinions are based on something. All parties involved comb over the various data, from 40 times to bench presses to the Wonderlic test. Absurd significance is placed on hundreds of a second. Did a guy run a 4.4 or 4.45 forty? Sometimes the forest gets lost through the trees. As an example, a defensive end who runs a 4.67 would get there 7 inches before a defensive end who runs a 4.75. Is that going to significantly impact your draft choice? So I caution putting too much emphasis on any of this information. When I heard that sports writer Dan Pompei was leaked a list of the Wonderlic scores, my first instinct was to write the above three paragraphs. Does it really matter?

Still, at a minimum, it’s an interesting exercise to look at the scores of NFL players. The Wonderlic is supposed to measure intelligence, and we’re often told how complicated and complex football can be. Intelligence should be a necessary tool to success, be it learning the playbook or simply making smart decisions. And yet, studies show that there’s no correlation between intelligence and football playing ability. So take these numbers with a huge grain of salt.

A little background. The Wonderlic Test is a twelve-minute, fifty-question intelligence test used in a wide range of occupations. While an average football player usually scores around 20 points, the average participant overall scores a 24. A score of at least 10 points suggests a person is literate. Running back Darren Davis of Iowa State reportedly scored a 4. Here are average scores from everyday professions:

According to Paul Zimmerman’s The New Thinking Man’s Guide to Pro Football, the approximate average for each NFL position are:

And here are some of the notable scores for the 2009 NFL Draft class:

At least we know these guys are at least considered literate.