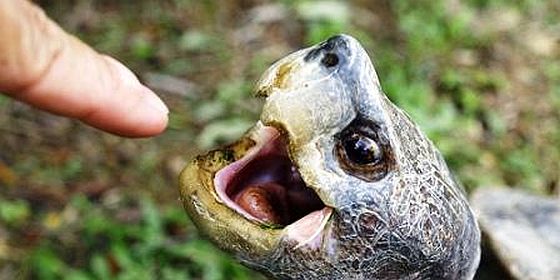 Former Ohio State coach Woody Hayes is already a legend in college football, going 205-61-10 and winning five national titles with the Buckeyes. He also had a legendary temper, getting in fights with media members, players and officials, including instigating a brawl when he punched an opposing player in the throat during the 1978 Gator Bowl. Now, according to new OSU Coach Urban Meyer, we learn that Hayes didn’t confine his mania to others.

Speaking at a coaching conference in Ohio, Meyer recounted a story of one of Hayes’s more controversial motivational speeches. Brought in after his firing by Coach Earl Bruce, Hayes decided that the current staff wasn’t tough enough for him. He then decided to demonstrate his own toughness in one of the most disturbing ways possible.

“He reaches down and grabs this box, slides the top and there was something in the box moving around. He reaches in and he pulls out this turtle. He reaches down, this turtle’s snapping and he says, ‘I’m going to show you toughness.’ He unzips his pants and takes out whatever he takes out. The turtle reaches up and snaps at him. You see the veins and the sweat. He screams at the coaches, ‘That’s toughness! That’s f’n toughness!’ He reaches down, pokes the turtle right in the eye and it falls off. He wipes the sweat off his forehead and says, ‘That’s the problem. We don’t have anybody in this room tough enough to do that right there.”

While the story is fun enough on its own, we have to give credit to the one, unnamed, assistant who spoke up in response to Hayes’s challenge.

“Coach, I’d do this. Just promise not to poke me in the eye”