Updating our World Baseball Classic 2009 Preview, today we examine Australia, Cuba, and South Africa. These three nations round out our examination of Pool B, with Team Mexico having been profiled earlier. Two nations will advance to the next round, with Cuba and Mexico heavy favorites to do so. Either is a threat to win the entire tournament, although the first step is to get past improved South African and Australian squads. 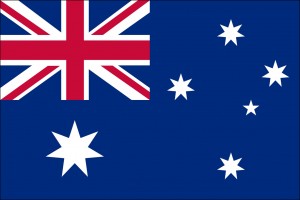 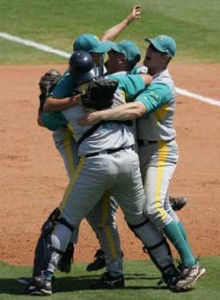 The Australian national team is controlled by the Australian Baseball Federation (ABF). Although played in all the mainland states and territories, baseball struggles for popularity with other sports such as cricket. Australia is one of the top competitors in that sport and school-aged children are generally guided toward a future in cricket, not baseball. The Australian Baseball League (ABL) was established in 1988, but disbanded in 1999 due to mounting debts. There is no current national league, but plans remain in place between the ABF and Major League Baseball to re-establish an National league. As recent as 2003 there was roughly 57,000 Australians playing baseball on approximately 5000 clubs, so there’s still sizable interest. The nation captured silver in the 2004 Olympics, helping stabilize the participation rate, but has seen poor international results in recent years. It finished 13th in the inaugural World Baseball Classic and failed to qualify for the 2008 Olympics. For the 2009 World Baseball Classic, Australia has been drawn in Pool B along with Cuba, Mexico, and South Africa. First round play will be held at Foro Sol Stadium in Mexico City, Mexico.

Despite the struggle to gain popularity as a sport, the nation still produces a fair amount of talent. The most famous Australian-born baseball players include catcher Dave Nilsson and pitcher Graeme Lloyd, and children were once issued a poster of the two with the slogan “AUSTRALIAN RULES BASEBALL”. Both are retired, but a number of Major League players remain, particularly among pitchers. Grant Balfour pitches for the Tampa Bay Rays, Travis Blackley for the Arizona Diamondbacks, Peter Moylan for the Atlanta Braves, and Ryan Rowland-Smith for the Seattle Mariners. Phil Stockman has also appeared in games for the Atlanta Braves, as has Rich Thompson for the Los Angeles Angels. Additionally, former Major Leaguers Luke Prokopec and Damian Moss are still active. Among hitters there is less talent, but still a few notables. Brad Harman plays for the Philadelphia Phillies, and free agents Justin Huber and Chris Snelling both appeared in the majors last season. The remainder of the roster will be filled with minor leaguers or Australians playing professionally in Japan, Korea, or various other countries. 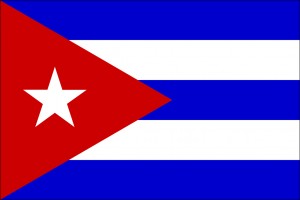 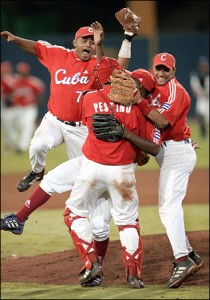 Baseball is big in Cuba, as it’s the official sport of the nation. And a true Cuban team could feature a number of Major Leaguers, almost enough to field a complete team. José Contreras, Liván Hernández, and Orlando Hernández could start. Danys Báez could be the closer. An infield could be formed between Kendry Morales, Alexei Ramirez, Yuniesky Betancourt, and Yunel Escobar. Eli Marrero could be behind the plate. And anyone left could take the outfield, be it Alex Sánchez, or whomever. Of course we know that’s not going to happen. For the most part those players defected, and the actual Cuban team will consist entirely of players who haven’t left the island nation.

That doesn’t mean Cuba is without talent. Many of the current Major Leaguers were on the national team before defection. Ramirez was even on the 2006 Classic squad. And Cuba’s current squad will undoubtedly feature at least a few future Major Leaguers that have yet to defect. It was less than a year ago that another promising young athlete left Cuba, hard-hitting third baseman Dayán Viciedo. Imagine what team could be assembled including all of Cuba’s best talent. 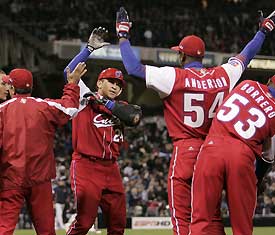 Despite the losses, the national team remains a dangerous opponent and extremely successful on the international stage. The team has participated in every Summer Olympic Games since 1992, never finishing lower than second. And in the 2006 World Baseball Classic, the country finished as runner-up to Japan. Of course, Cuba always send its best player to these tournaments. Or at least those that haven’t defected or are deemed a threat to defect. Their opponents can’t make the same claim.

In many ways Cuba operates much like the old U.S.S.R. hockey team did. All of its players, even at the highest level, are amateurs, as there are no professional sports leagues. The best prospects find their way into the Cuban national baseball system, and maintain their amateur status while being developed by the country’s best resources.

For this year, many of the players who helped Cuba get to the final three years ago could return, including outfielder Yoandy Garlobo, outfielder Frederich Cepeda, and pitcher Pedro Lazo. Two key players who apparently won’t be participating are pitcher Yadel Marti and outfielder Yasser Gomez. Both were reportedly kicked off after being caught trying to defect to the United States. 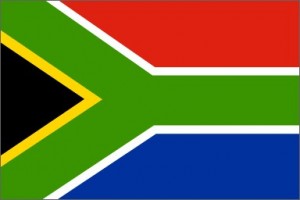 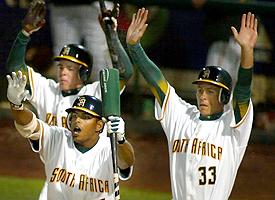 South Africa is not your traditional baseball country. In fact, the nation’s inclusion in the inaugural World Baseball Classic was a bit of a surprise. It has never sent a player to Major League Baseball, and no player has even advanced above Double-A. To make matters worse, Major League Baseball did the country no favors by sacrificing it in a group loaded with the United States, Mexico, and Canada, all major baseball powers. The highlight of the tournament for the nation came when it took an 8-7 lead over Canada into the ninth inning before succumbing 11-8. Officially the team finished last in 2006.

For 2009, the sole African representative looks to continue to make strides and gain respect in the baseball community. It will open play against Cuba in a group that at least doesn’t have the United States in it. While there will be no major league players, the team should feature six guys who have signed Minor League contracts: pitcher Alessio Angelucci of the San Diego Padres, pitcher Justin Erasmus of the Boston Red Sox, pitcher Dylan Lindsay of the Kansas City Royals, pitcher Hein Robb of the Minnesota Twins, infielder Anthony Phillips of the Seattle Mariners, and infielder Gift Ngoepe of the Pittsburgh Pirates.