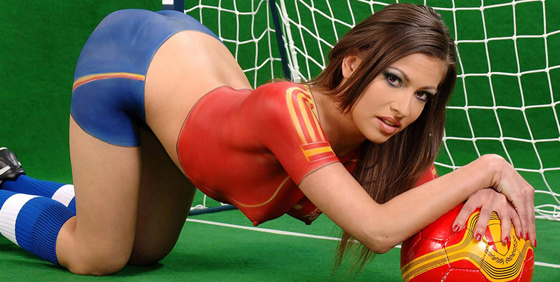 This would have been a way better game.

Okay, so I only watched about three entire games for the whole World Cup tournament, making me a casual fan at best. Despite that, I think I grasp the basics of the game well enough (don’t go offside, don’t use your hands **cough URUGUAY! cough** ) to have a valid opinion on what was perhaps the most embarrassing championship match I’ve ever had the displeasure of sitting through. Aside from the usual diving that was on display for much of the tournament, I was completely turned off by the poor sportsmanship and subsequent whining that plagued this highly anticipated match.

The only thing worse than the sometimes barbaric tackles of the Dutch was the play-acting by the Spaniards on some of the less obvious and even non-contact fouls that overworked official Howard Webb got tricked into calling. The Dutch seemed oblivious to the fact that they were only hurting themselves by attempting to bully Spain as Webb got suckered into some bad calls that might have gone the Netherlands way otherwise. Check out this obvious dive:

Come on, Alonso! You expect us to buy that??

Okay, bad example. Anyway, fouls aside (the match set a record of 14 yellow cards), the whining from players of both sides following every call was really starting to wear thin, even before the first half was over. Dutch striker Arjen Robben was perhaps the worst; after a non-call on a play where Robben burst through the Spanish defense and failed to capitalize, he proceeded to cry to Webb for an inappropriate length of time in a futile exchange that resumed as the teams left the pitch at half time. That’s bad enough, but Robben then continued after half time when the teams took to the field after the break! 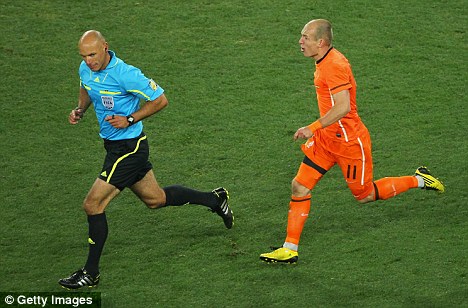 Hey, I know you can't reverse the call, you just smell so damn good!

Pathetic as Robben’s behavior was, it was a play involving eventual goal-scorer Andres Iniesta that finally consummated my disenchantment with “the beautiful game”: After not getting a call on one of his many dives in the match, Iniesta got up (rather quickly for someone who’d been writhing in pain seconds earlier) and proceeded to bump Mark Van Bommel, who then went down like a ton of bricks (I’d show the video but it’s suspiciously been taken down by FIFA, probably out of sheer embarrassment). The fact that Iniesta became the game’s hero soon after left a bitter taste in my mouth that won’t soon go away. **

**I tried to wash it out with a sh*tload of beer, but that didn’t help. Maybe some Probert fights on Youtube will do the trick.