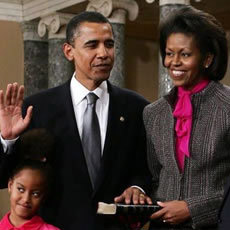 The one thing I am grateful for is that on Tuesday, Inauguration Day, my boss gave me the day off work so I don’t have to commute to my job in Washington because the subway will be crowded with four million Obama f-ers who plan to freeze their butts off together to watch a rehearsed ceremonial moment in history. Let me tell you what’s going to happen so you can save yourself hours of commuting on sub par transportation, getting frostbite, and pissing yourself because you can’t find a porta-potty.

What do you think he’ll do, grab his crotch and twirl ala Michael Jackson? Break out of that Urkel impression he’s been doing and scream “Yeaaaah!” like Lil Jon?

I’ll be at home watching… not the Inauguration, but the Sopranos on HBO On Demand. Season One is playing again.