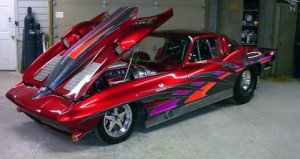 You may have seen our Ten Ridiculously Expensive Cars article, and you also may have noticed that one common thread in all of those vehicles was world class acceleration combined with top-end speed. Well Rod Saboury of Manchester, Maryland decided to design and build his own super car.

His modified 1963 Corvette has been clocked going from zero to 60 mph in one second. Moreover, the car can reach an eighth of a mile in 4.56 seconds (going 159.27 mph) and the quarter-mile mark in 6.95 seconds (going 210.54 mph). That unofficially makes him the owner of the World’s Fastest Car. And it’s street legal.

Want more information? You can read more about him from the Baltimore Sun, and there’s also this video: