Grub > Food > Is This the Worst Food You Can Make? Possibly.

Is This the Worst Food You Can Make? Possibly.

You may confuse the above image for one of Cthulu’s turds or the physical manifestation of a loveless marriage in loaf form. But no, it’s a food, a food served exclusively to the men and women held in our prisons, but a food nonetheless.

Dubbed the “Nutraloaf” it contains just enough nutrients to replace a regular, non loaf meal and it was specifically created to be as bland and unappealing as possible. The title to this article isn’t a joke, they actually went out of their way to make the worst food ever, while still giving it enough nutritional value to not have it registered as a biological weapon. The loaf is served to inmates for a variety of reasons, the most common being that said inmate abuses their food privileges by trying to stab the shit out of people with their knives or forks, you know because of prison rules.

Now because of the loaves ahem, unique texture, they don’t need to be served with cutlery or even a plate, in most cases being served on a single sheet of paper. Which means that yes, they really couldn’t have made this thing look any more like a turd if they tried.

You’re probably thinking, is it really that bad, it is served to prisoners after all and as we all know, prisoners suck. Well it’s being argued that the loaf is so bad, it’s actually unconstitutional, well according to the dozens of prisoners who’ve filed lawsuits because of it. Then again, most of society operates on a strict, “fuck what prisoners think” policy, so they often go ignored. But just consider that it’s so bad, that hardened criminals will straighten up and obey the rules, or even beg, just to avoid it.

But you don’t have to take our word for it, because you can totally make one yourself. But like all good recipes, there’s no agreed way to make Nutraloaf, so feel free to embellish on the following recipe if you want.

Mix all of the above together in a bowl, put in a baking tray and cook. Boom, everything your body needs in a handy, loaf shaped package. 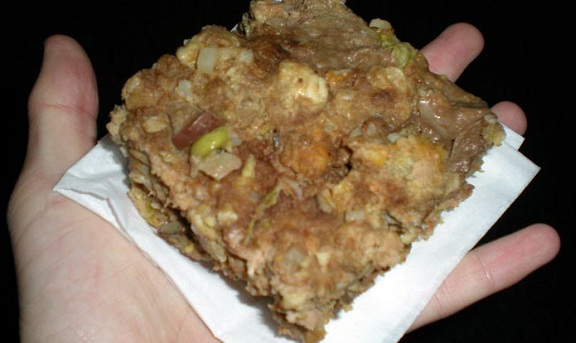