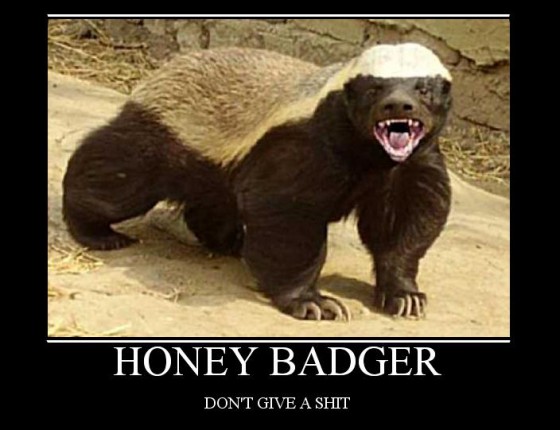 In what I imagine is an extremely early April Fool’s gag, the internet meme “Honey Badger” is being pitched as a TV sitcom by a Canadian production company. That thud you hear is me repeatedly bashing my head into the wall beside my desk.

On the heels of Randall and “the crazy, nastya– Honey Badger” videos’ 31 million-plus YouTube views, the viral sensation is being developed as an animation/live action comedy hybrid, titled Honey Badger U.

The project, which soon will be pitched to both broadcast and cable networks, will follow an animated Randall, who is the chief professor of life sciences at a dysfunctional university. His course will feature his trademark color-commentary on documentary footage of topics related to science and the animal kingdom while forming an unusual bond with his student, fellow professors and the University mascot, “Honey,” a “nastya–” honey badger.

I give it four episodes. Two if NBC buys it. Listen, I have nothing against Honey Badger per say. I mean, he’s nasty and runs in slow motion and clearly doesn’t care about anything, but an animated cartoon he is not. I’m still holding out hope for a buddy cop series starring Keyboard Cat and Pedobear. That would be epic!