Media > Movies > Wrapping Up The Best in Mummy Movies

Wrapping Up The Best in Mummy Movies 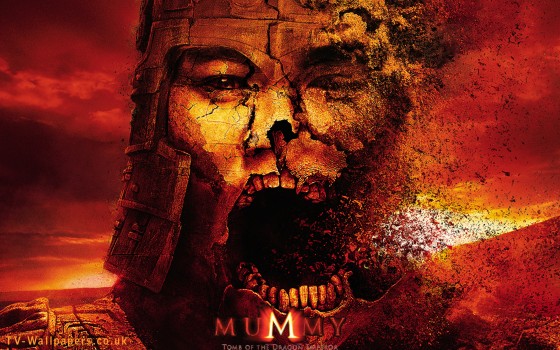 The Hell? Mummies? Look, the big two of horror genres have gotten out of control lately. Vampires from one end of the spectrum to the next with sparkling emo bloodsuckers to underground bat-beasts, and werewolves either fighting said vampires or else spawning from a remade wolf man movie. The point is, its time we take a different look at another of the original monsters and ‘unwrap’ the age-old mummy!

Mummy movies are an odd breed. For many decades they dealt with a guy who had been screwed over in some such way who was eventually brought back from the dead -usually around the same time that someone human is walking around that looks an awful lot like a ‘reincarnation’ of the Egyptian princess that he has the hots for. Most of the movies, including the newer series with Brendan Fraser tend to stick pretty close to this formula.

With that out of the way I present you with ten of the best of the group.

Wrestling Women Vs. The Aztec Mummy

Right out of the gate and we have ignored the whole Egyptian thing completely. You do get overweight, wrestling women, (the illustrious SANTO) along with what may be the worst/best mummy in the history of mummy movies. That been said, you could do worse and this is a fun flick as long as you try to make no sense of it.

I Was A Teenage Mummy

A parody of the ‘Juvenile Delinquent’ flicks of the 50’s with the coolest garage band ever, The A-Bones. Throw in a teenage kid becoming a hormonal mummy and you’ve got a future classic on your hands.

This one still includes the Kharis mummy from the Boris Karloff original, and blends in a little comedy to get this one going. I did like that they outfitted the mummy with all black eyes in this one. Made it that much creepier.

This one has a tendency to forget all that had come before, genre wise. The mummy had been burnt and beaten, but in this one, he inexplicably comes up fresh as a daisy. John Carradine as the priest makes the movie better than it should be regardless of the lack of story continuity.

In between the Hand and the Ghost is the Tomb which gives us Lon Chaney Jr. in the role of Kharis (Karloff’s baby). This one brings all the action to the states this time around and Chaney plays an excellent Kharis, just as he does with all of his rolls -being the make-up genius that he was. It does tend to get a little campy, but that adds to the all-round flavor of the flick.

I must admit, when I first heard of these that I assumed that they were going to be terrible. Yet, somehow, I always manage to catch them at the theater. I consider the first one the better of the three, but the newest one with Jet Li as the mummy made for an interesting diversion. Now they can keep making them and just get a mummy from every culture for Brendan Fraser to fight. Wheeeee! All sarcasm aside these are excellent adventure flicks that are a throwback to the thrilling serials of yesteryear. Also they feel a lot like Indiana Jones goes horror, especially the third one.

You know I had to include Paul Naschy (thanks, Doug!) in this list! He plays both the mummy and the high priest who brings him back from the dead. Of course no tanna leaves are gonna do the trick this time. This mummy needs young, nubile virgins to make him stick around. All the mummy wants is revenge and he’s willing to kill a lot of people to get it. Probably the bloodiest one on the list, but its Naschy doing what Naschy does when he’s not playing a werewolf. Also… more Santo!

Two aliens from a dying planet plan on conquering the Earth by preying on man’s superstitions. They bring The Mummy, Frankenstein’s Monster, The Wolfman and Dracula back to life and set them on the general populace. Of course, it is a well known fact that monsters do not get along and it isn’t long before they start tearing each other apart. A great monster mash up that deserves to be in this list.

Now we are getting to the two heavy hitters that made this part their own. This time up it’s is Christopher Lee in a time when Hammer Films ruled the horror roost. Lee portrayed every legendary monster you can imagine; Dracula, Dr. Jekyll and Mr. Hyde, and, of course, the unstoppable Kharis, The Mummy! This is a really good ‘update’ of the original Karloff saga. Lee brings a silent intensity to the part and seems much larger than life when he stalks his prey in this film. While Karloff could intensify the dead-like aspects of Kharis, Lee brings a foreboding, all encompassing rage to the part. I think this is the one point where the newer Mummy movies failed. They let him talk. Any actor can talk. Try doing it silent.

You knew this one was going to be at the top, right? Karloff brings his A-game to the story that we all know by heart. The tale of Kharis and his love lost through the ages Anaka. Their passion is so great that is survives for eons until they can be together again. Watch Karloff and the look of agony on his pallid face as he plays Kharis like no one else would be able to manage these many years hence. Add to that the superior cinematography of Karl Freund who actually spent more of his career behind the camera than the director’s chair and you have a film that deserves the title classic.

Oh… and Here Come the Mummies!