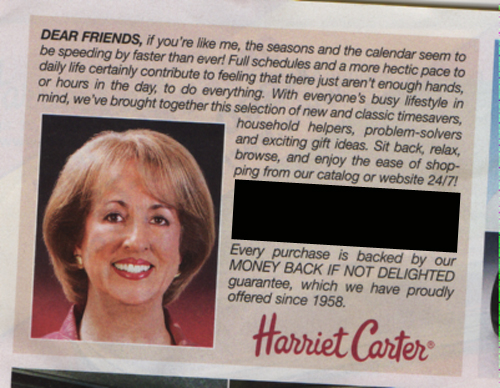 You know you’ve seen them: junk-mail catalogs jam-packed with crap you’d never in a million years want to own, let alone purchase yourself. Everything from bird feeder squirrel traps to eyebrow-plucking combo-armpit razors. Hell, even the ‘As Seen on TV’ ad folks have taken to advertising in this rag, up to and including several pictures of the exalted Billy Mays himself on every other page! Ah but it’s not any of these things -or people- I’m mentioning today, oh hell no. For the purposes of this ‘magazine’ breakdown, I went searching for the most ridiculous, outrageous, and just plain ‘F’d up things I could find. And believe me: I didn’t have to look far, for within the hallowed pages of the Harriet Carter catalog lie some of the most diabolically asinine inventions of all time.

Let’s break down all the things wrong with this item, shall we? First off, no self-respecting dude (regardless of age) would be caught dead wearing a damn blanket touting his favorite football team. I don’t give a shit HOW warm it looks; you = not a man if you’re covered in a NFL fleece when your bro-buds come over to toss back a few cold ones and yell profanity at the big game. Failure. Epic. Secondly. Take a look at this guy. Look some more. Yeah, you get it. Moving on. 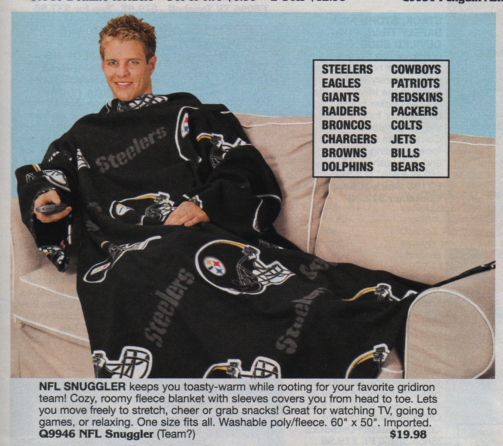 “Yeah… The Ladies are Gonna LOVE Me!’ – Hair Cutting Comb

Look, I cut my own hair, too. Granted, I cut it all the way off… well, I guess that’s more like shaving, but still. The point I’m trying to make is that this tool is, for lack of a better term, dumb. Just look at the craftsmanship of the combination sharp comb/regular comb. Just plain stunning. Can you imagine the sheer (ha!) agony of swiping this medieval tool through your coif? I’d have to assume you’d end up with a wadded tuft of scalp ripped from your skull rather than a clean, smooth, professional trim. Ah but the chicks will swoon, man! 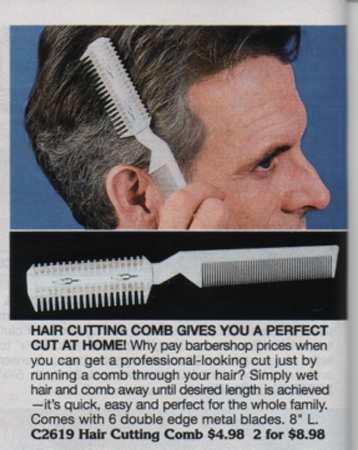 Ya know, I love me some bacon. I really, really do. Bacon on sandwiches, bacon with pancakes, bacon in my bathtub… but I digress. This is, with out a single doubt, the most wretched bacon I have ever seen and I would, under the right circumstances, eat bacon trampled on by a parade of zoo animals. I think I’d more likely eat raw bacon directly from the freezer that consume this scabbed corpse flesh. If you have to cook bacon in a microwave, you sir or madam, do not deserve bacon. Period. 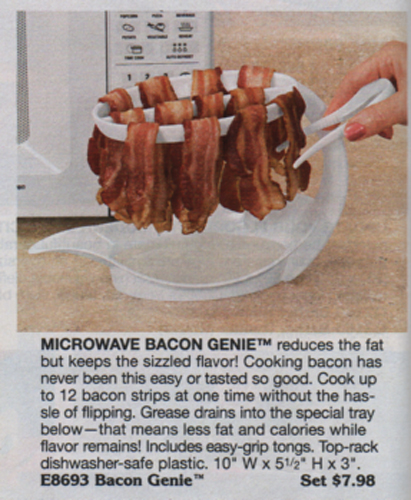 Of the ten items I discovered on this list here, I’d have to say these things are probably the most useful. Why? Have you been somewhere -I don’t know: mall, WalMart, a family reunion- and you happen upon a woman who might be, um, let’s say, the polar opposite of pretty while at the same time not wearing a brassiere? Yeah, that’s about as traumatic as catching your parents doing it. The point is, no one wants to see nipples jutting from a ‘Who Farted?’ T-shirt as they’re shopping for groceries. So, with these little silicone boob covers, you, too, can avoid harming the general public with your high-beams. Please. 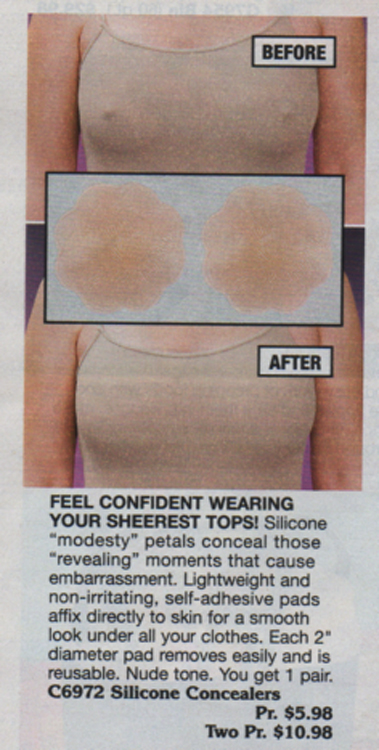 There’s no doubt that humor is subjective. You are, after all, reading this mess. Be that as it may, there are certain subjects that just aren’t funny regardless of what you print on a T-Shirt: abortion, school shootings, knitting. Take a long hard look at this woman’s expression. She has the far away sneer of a housewife, so angered and distraught by the lack of love for her husband, who has, in all likelihood, slaughtered the poor man. He’s probably lying in a pool of is own congealing blood on the kitchen floor, riddled with a multitude of killing needle holes. Oh yeah, this lady has lost it. 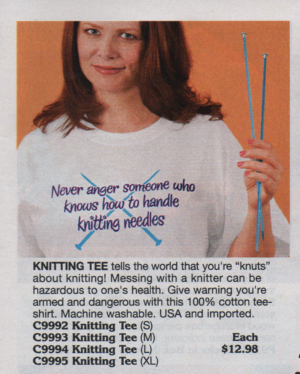 The Wife-Beater That Trims Your Tummy! – Men’s Body Shaper

I’m not really sure where to begin with this. Is this guy just lonely and needy enough when attempting to score with a bar chick to want to wrap his beer gut in elastic? Or, perhaps he has a really important job interview at Burger King and doesn’t want the 20-year old night manager to see his paunch. Or, my personal choice, he’s the best man at his buddy’s wedding and he really wants to look good in the photos. Yeah, I got nothing. Basically, this guy looks like he’s trying to prevent the one tummy ailment one would achieve wearing that exact same tank-top. I guess he’s happy, though. 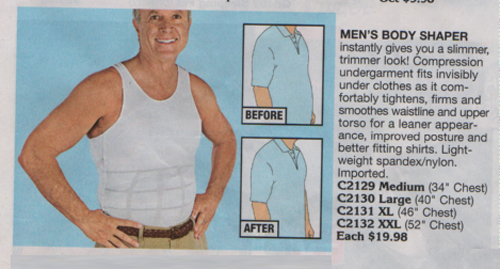 Fancy Dan here has varicose veins, but that’s not why he wears these high-fashion stockings! Oh Heaven’s no! He is skipping and twirling his way to a brand new acting gig off-Broadway in a play called ‘Prance!’ His audition went off without a hitch, thanks in part to his brand new stirrup socks that lift, separate, and remove the ache of sore leg muscles… and boy are they hot! Dan is lucky to have friends like Muriel, Gladys, Audry, and Bill who bought him these awesome leggings in support of his newest job roll: that of a 30’s-era stripper! 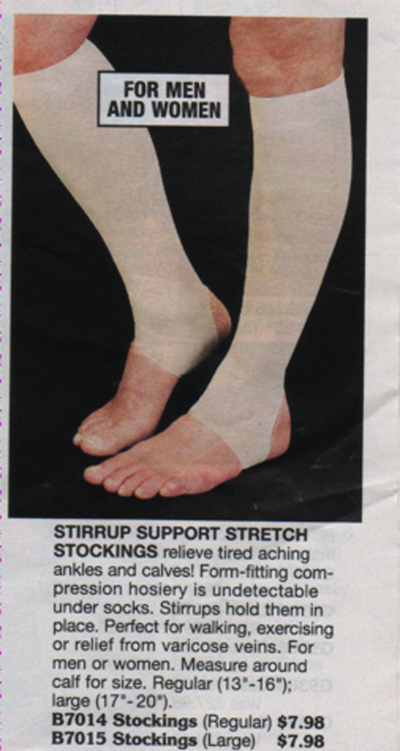 I’m not sure what ghastly disease this woman is suffering from on her little toe, but it looks a hell of a lot like leprosy! If this is just one toe on her foot, I just have to assume the rest of this creature’s gnarled talons are not going to be the least bit affected by this Nonyx crap. It’s like covering a hatchet wound with a Band-Aid. I guess the point I’m trying to illustrate here is that this stuff doesn’t work. Probably. 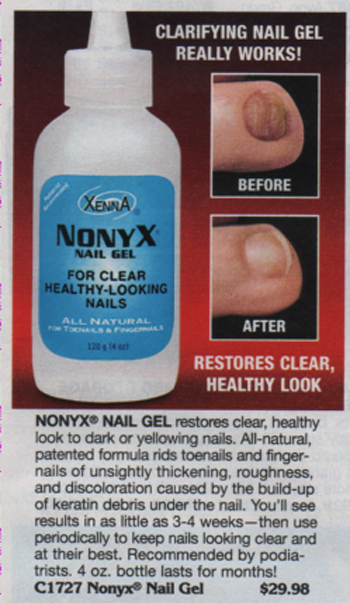 “I Didn’t Order Pizza, But I Like Meat… Where Are You Going?” – Moisture-Absorbing Nightgown

The very description of this garment literally made me have to excuse myself to go throw up. If you’re sweating that much when you’re sleeping, perhaps you need to either turn the air conditioning on or move off the surface of the sun! Oh, sure, I’ve woken up in a cold sweat before after a hellish nightmare featuring demon goats and Dick Van Patten, but I’ve never once wished I was fully draped in a chamois! Seriously, if you have to wring out your sheets and hang your night things outside after one night’s sleep, I’d recommend a doctor over a drying night shirt. But that’s just me. 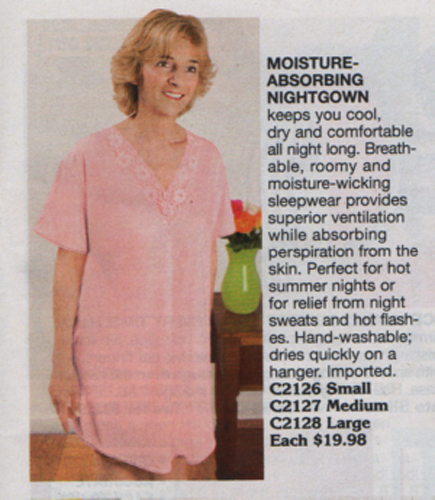 The Newest in US Torture Techniques – Hair Cutting Umbrella

Before you even have to ask, this poor bastard is indeed wearing a Kiddie Pool on his collar. I’m not sure which I’d hate to admit to more: having my own wife cut my hair, or having my own wife cut my hair while having my head thrust through a giant bunt pan. If it takes more than a towel on the bathroom floor and your own vacuum cleaner to spruce up after a quick hair trim… in fact so much so that you need a manhole-sized trough encircling your neck, perhaps you’re a werewolf or Robin Williams. Either way, this shitty thing is stupid and shitty. 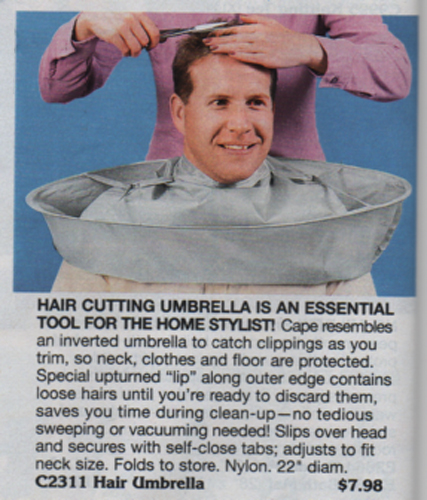