The Marvel Comics team called ‘The X-Men’ has been a revolving door club since 1963. Basically, the underlying system that feeds the group is Charles Xaviers’ School for Gifted Youngsters, or the ‘Xavier Institute’. If the boss thinks you’re ready to take the mutant equivalent of the SAT’s to get onto the teams’ roster, then it’s only a matter of avoiding being ostracized or burying your evil tendencies behind a massive mental wall before you’re fighting alongside the likes of Storm and Wolverine. Not necessarily an easy task.

Ah, but it isn’t always Ice-Man’s and Shadowcat’s for this team. No, sadly there have been members who were -and are- less then stellar in both appearance and powers; members who one would assume would most likely be shunned by even the more mediocre teams like Alpha Flight, and yet have managed to find their way onto a the upper echelon of teams like The X-Men. Here are ten of such examples.

I don’t believe everything I read, and when I see that it says Mimic had even a modicum of popularity, I have to guffaw in its general direction. Sadly, his story and gain of powers is as common as ridiculous deaths in the Marvel universe. You see, his dad had this chemical lab, and Calvin got some on him and bam… he can copy the attributes and appearances of any super-powered being within ten feet of him. That’s kinda close, dontcha think? If you were within ten feet of, say, the Hulk and, somehow, he hadn’t socked your mush to the next block, and maybe Mimic’s power wasn’t quite instantaneous… yeah, well, you see where I’m going with this. Oh, and this exact scenario actually happened which put Calvin in a coma due to the gamma radiation and it took Wolverine hanging out to bring him back… after twelve years. Awesome. And Lame. And that giant ‘M’ on your chest is just magical.

Writing a character with the ability to stop time is a tricky task. You can either make it very cool where there’s a specific limit to where and when a person can fully manipulate the abilities -sort of like Hiro from ‘Heroes’- or, conversely, you can make a ridiculous mess like Sway. Basically, Suzanne had a bit of a Batman moment when she witnessed her parents being gunned down in super slow motion while she somehow managed to save herself in the process. How? Well she pulled a Dr. Who and slowed time enough to get out of the way of the bullets. By herself. Yeah, way to protect your mom and dad, stupid. So beyond that, apparently she could freeze the ‘time’ of single objects, which is cool and also unbelievably not even kind of realistic. I know it’s comics, but come on.

Want a mutant who relies on luck and looks like if Richard Marx joined The Village People? Let’s talk about a lame character with a long ass background: Longshot. Sure he had a pretty popular origin drawn by the stellar Art Adams, but that doesn’t make up for the fact that he sucks, and so does his stupid-ass ‘Mojoverse’ and the morons who inhabit it: Mojo and Spiral. According to Marvel, “Longshot was created through genetic engineering by Arize. Longshot has only three fingers and an opposable thumb on each hand. He also has leather-like skin, hollow bones and two hearts, giving him superhuman speed, agility, endurance, and reflexes. He has exhibited advanced healing abilities as well.” Uh hu. It’s not bad enough that we have shitty characters from our own dimension, we need to create a whole different one just to house this ass?

Let me just start of by pointing out the two most obvious points of stupidity possessed by this chick: she’s occasionally Longshot’s bitch and she used to dress like a Xanadu extra complete with roller skates. Also, much like the far cooler Jubilee, Dazzler can spit wads of light from her self effectively making her a living, and incredibly shitty, Disco Ball. Awesome. In fact, back in the 70’s when she made her first appearance, she was to be cross-promoted with KISS even going so far as to possibly be a human with a recording contract. Stellar. The plot, and, as it turns out, the basis for her powers even to this day, was to use music as the medium from which she could convert sound waves into light. So, in essence, she’s her own terrible band. Yay, Dazzler!

In an attempt in the mid-90’s to ‘cool up’ the X-Books, Marvel decided to draw names and random powers out of a hat and just create whatever mish-mash came about. Marrow is but one of those ridiculous outcomes. Basically, as a Morlock -the hideous mutants who hide out underground and basically just cause trouble- Sarah discovered that the bony projections sprouting from her body could be physically yanked off and used as really disgusting weapons. She then, after a run in with Cable, joined the X-Men under the tutelage of Wolverine whereby she could bone him a little, too. Yeah, gross. Also that is a really stupid power.

Speaking of foisted-upon-the-readers characters with lame, sob story background created to generate sales and empathy… I give you, Maggot. Born a sickly South African boy during Apartheid, Japheth could not eat solid foods (wouldn’t seem like too much of an issue, but there’s more) and decided to kill himself rather than burden his parents. So he wandered off in search of a good place to die, when Magneto found him and (ready for this?) showed the boy that his gastro-intestinal workings were controlled by a duo of maggot-like things who could, at will, consume anything and return to Japheth’s body giving him strength! Maggots I said. Next!

I don’t care what you say, how you say it, or who you say it to, Cable sucks a box of ass. I think part of the problem is that most of his design and even his name were a creation of notorious comic book asshole, Rob Leifeld, who single-handedly managed to fuck up everything he so much as looked at. But even so, taking a ball as nasty and worthless as Cable and being allowed to run with it after your creator jumps ship to a new company should automatically forfeit any future use. Cable is from the future, is the child of Cyclops and Madelyn Pryor, has a bizarre twin in Stryfe, is potentially responsible for the deaths of several mutants, and wears big-fucking shoulder pads like some kind of 80’s M-TV video extra. So not cool.

Needing several meetings on how to up the silly and disgusting factor set by Maggot, Marvel decided next that the best idea would be to have a chick (the sister of Cannonball, by the way) who is able to shed layer upon layer of skin to reveal any number of different structures beneath such as metal, rock, or possibly country. Yes I know she was originally revealed in 1986 as a sibling of the Guthries, but 1994 showed her first true story, at more or less the same time as Maggot. Look, comic dorks, I was trying to be funny. Yeesh. Anyway, like any good convoluted mutant, Paige must first study and be able to recognize the substance of which she is attempting to take form for her power to really work. Maybe one day she can become a giant pile of feces! Oh, too late. 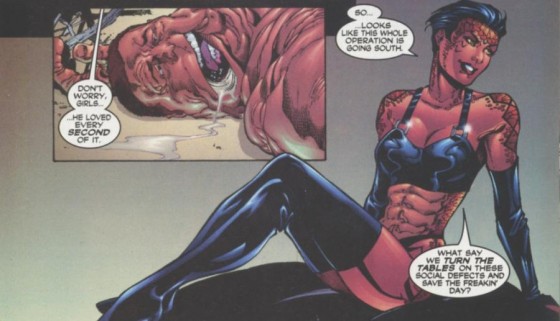 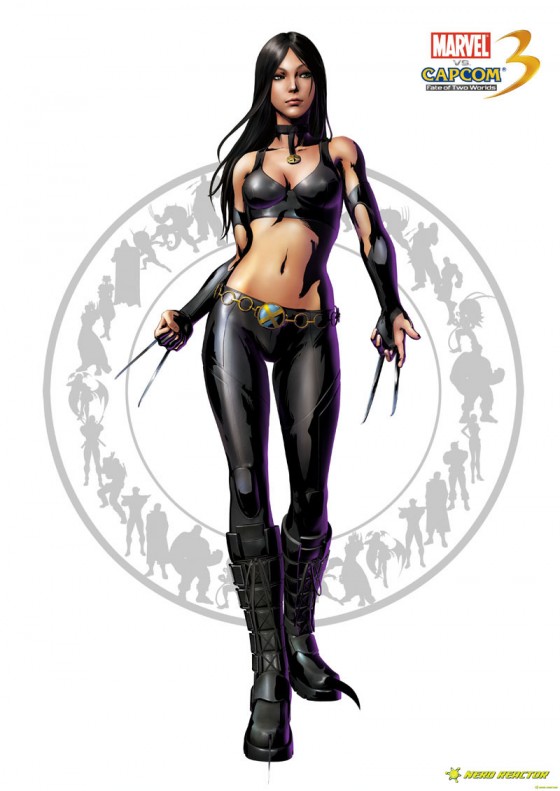 As everyone knows, the whole ‘Weapon X’ thing has really gotten way out of hand. Born and bred as a genetic ‘twin’ to Wolverine using some kind of new fangled attempt at the original Weapon X program, Kinney is treated no better when all the enhancements and shit are forced on her: adamantium claws and the like. She is then given a trigger ‘scent’ (possibly the opposite of a safe word in S&M) which turns her into a rampaging, murderous lunatic. So, naturally she feels the need to track down everyone’s favorite original clawed mutant, Wolverine, and beat the ever-loving shit out of him only to tell him a bed-time story. Also Captain America and Dare Devil were there doing… stuff. Look, all I know is we really don’t need ‘remakes’ in comics as well as movies, so a fresher, faster, female Wolvie is just plain idiotic. End of diatribe.