Gadgets > Electronics > Get Wet With the XtreamP3 Waterproof MP3

Get Wet With the XtreamP3 Waterproof MP3 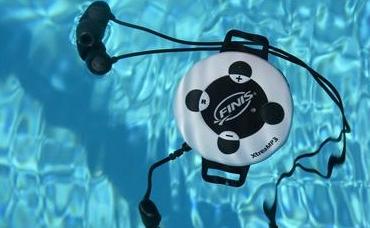 Surfers, skiers, water-skiers, snowboarders, snorkelers, wake-boarders, people who love taking baths, beach rats, swimmers, hardcore runners. Looking for a dependable way to get your music to your ears while you enjoy your favorite pastimes? Look no further than the FINIS XtreamP3 Player.

A fully waterproof media player, submersible up to 15 feet, the XtreamP3 is a solid and simple to use player for listening to your music or podcast mp3 or wma files. While it won’t play mp4 files, which are popular on iTunes, a couple of simple setting changes will make your iTunes library fully compatible. The circular body features four buttons, easily attaches to a neoprene armband (included), and comes with waterproof earbuds and 1GB of storage.

I decided to test the XtreamP3 in three different scenarios, at the beach, on a rainy day jog, and in the most treacherous place I could put it in, my daughter’s bathtub.

Being the serious tester that I am, I listened to Rupert Holmes’ “Pina Colada Song” as I sipped one with the player buried in the sand, then dove into the water and obeyed Fishbone’s “Swim.” The earbuds held up nicely, actually sounding better under water for some reason, and also seemed unaffected by the sand burial. After vacation, it was time to run off the extra pounds gained, so I hit the road, rain and shine, with the XtreamP3 on my arm and Run DMC in my ears (way  better than Flock Of Seagulls “I Ran”). Through one rainstorm and one light drizzle, it stood the test like it was a day at the beach. Still going strong. The final test was one no gadget should be forced to endure, a bath-time play session with my daughter. While she listened to The Trashmen’s “Surfin’ Bird” on repeat, the player was used as a bomb to sink plastic boats and also as a skim board for Hannah Montana. After all three trials, the flowers were still standing.  The XtreamP3 player held strong though the tests and was still functioning as it was when I took it out of the box.

If you’re into a lifestyle that requires a waterproof media player, the XtreamP3 is a solid choice.  Pick one up from Amazon for around $100.