Once known as the site people used if they didn’t have AOL, Yahoo.com lost its dominance years ago as Google became the search engine to use and better alternatives emerged for each of its many features. But according to Alexa.com, Yahoo is still one of the top sites on the Internet. Perhaps it’s a legacy from those who created Yahoo e-mail addresses a dozen years ago and have been slow to migrate elsewhere. Or perhaps it’s because, despite all its noted struggles from a business perspective, Yahoo actually still does a few things correctly.

Take, for instance, the Yahoo home page. Never mind the customizable features, like the menus with favorites, the home page remains just as relevant and interesting as any news site on the Internet. Its sports blogs, like Puck Daddy, out-pucks the coverage on sports sites like ESPN and Sports Illustrated. An early player in fantasy sports, I’m told people still use it for that (while it keeps my data from more than a decade ago).

Yahoo also acquired – then abandoned – other web-innovating features, such as what was originally Geocities, making users migrate their free websites elsewhere (perhaps to Google Sites) unless they wanted to… ick… PAY for hosting. Yahoo made Mark Cuban a billionaire by acquiring broadcast.com, before splitting up the services and eventually discontinuing them. At one point, users of Yahoo Finance could link their brokerage and bank accounts, before they brought an end to that, missing out on what Mint.com eventually became. Then there are features that are still around that people don’t use anymore, like Yahoo messenger.

What has Yahoo done right, lately? Flickr. People want to put their photos online and that software has proven to be a winner. Google’s alternative, Picassa – or what I think is simply known as ‘Photo Albums’ – isn’t bad software but doesn’t seem any better than Flickr.

Yahoo also has a feature called Yahoo Answers, where people can ask anything and anyone can answer. These frequently pop up in Google search results when you’re asking Google the very same question (and some make for very humorous reading).

But even with the things they’re doing correctly, it must be irking the founders and long-time shareholders who watched Google race past Yahoo to the point that it’s hardly necessary to even sneak a peak at what’s going on in there. Just think. If this company played its cards right, it would be the Internet (because, let’s be honest, AOL never had a chance). 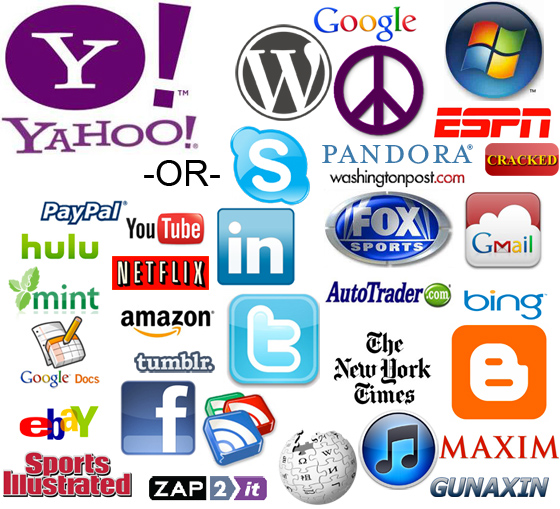 Alternatives to Each of Yahoo’s Features

Dating alternative: Match.com, which Yahoo hooked up with after its own personal service went belly-up

Finance alternative: This is one that Yahoo originally got right, then they ceased allowing account linking. Might as well use Mint.com for linking your financial sites.

Flickr alternative: Flickr is good, so it’s good for Yahoo who bought it back in 2005. Google’s Photo site isn’t bad, but Flickr will be around for a while.

Games alternative: Take your pick. Games are ubiquitous on the Internet.

Jobs alternative: Here’s another tricky one, because Yahoo’s own HotJobs.com got bought by Monster, so now Monster is Yahoo’s ‘jobs’ site.

Messenger alternative: I don’t know anyone who uses this anymore. There are so many third party applications out there that combine services that it almost doesn’t matter which one you use. At the same time, not sure how often AIM is used anymore, either. If you use a Mac, use iChat.

Movies alternative: This isn’t a bad section on Yahoo, but there are so many ‘movie’ sections on the Internet now, including your local news website’s movie section for local theaters, or big magazines like Entertainment Weekly for reviews.

Music alternative: Your own music on iTunes, or Pandora.

News alternative: I’ll give props to this, but news is a commodity now so if you never look at Yahoo news again and only use Google news or news sites like the NY Times, you’ll get your fill.

Real Estate alternative: This has been an okay section, but there’s also realtor.com and Zillow.

Screen alternative: What an awful name. And the page itself doesn’t really make it apparent what it is. It’s just Yahoo-produced videos. Just watch Youtube or Hulu.

Travel alternative: Seriously, it depends on where you’re going. No matter how hard any site tries, there is no one-size-fits-all travel site, particularly for researching things to do or places to stay. As for finding the cheapest airline price? Before dropping hundreds on a ticket, TRY THEM ALL (except Orbitz which sucks).

Weather alternative: weather.com or look out the window.