Yankees Could Learn From Pablo Sandoval 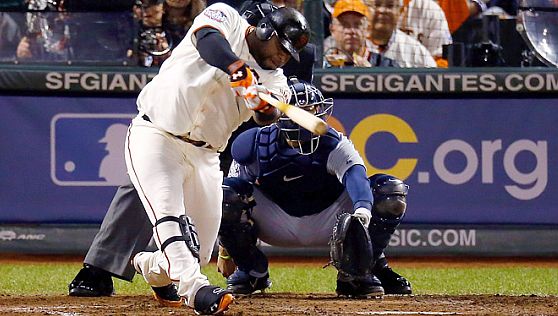 With his big game Wednesday night San Fransisco Giants’ third baseman Pablo Sandoval not only powered his team to a World Series lead, but further embarrassed a New York Yankee team that struggled in the ALCS. First, we need to look at how impressive Sandoval’s game was. Sandoval is only the fourth player to hit three home runs in a single World Series game, after Babe Ruth (twice), Reggie Jackson and Albert Pujols. His 13 total bases are second all time, after Pujols’ 14 last season. Sandoval is also the first player in history to hit a home run in his first three at bats in the World Series.

Now, to compare that to the numbers the Yankees put up against the same Tigers team last week.

For a Yankee team that failed miserably in the ALCS, and faces personnel questions this offseason, Sandoval’s explosion has to add insult to defeat. We recommend they play the film of Pablo’s big day in the clubhouse during spring training next season to remind the Yankees how poorly they played in comparison.