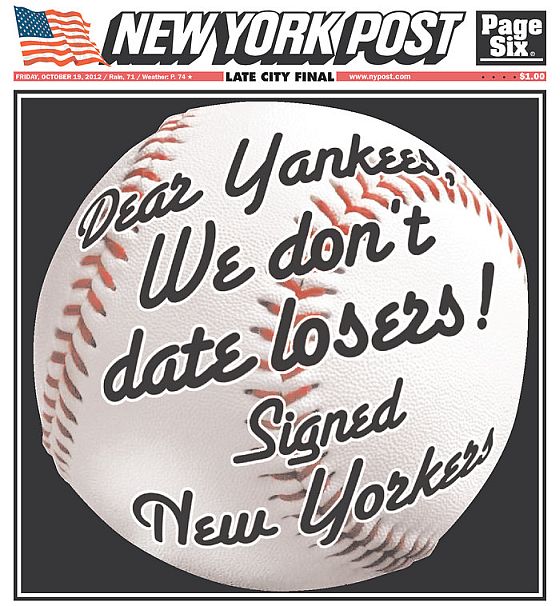 It’s been a rough week in New York. The Yankees were swept out of the ALCS last night by the Tigers, and looked hopeless doing it. Their best player went 1-18, while their highest paid player was too busy flirting with a bikini model to care. While the New York Post took advantage of A-Rod’s flirtation to send their own little love note to the team, Yankee fans can hardly take the high ground here, having failed to fill Yankee Stadium during the playoffs. 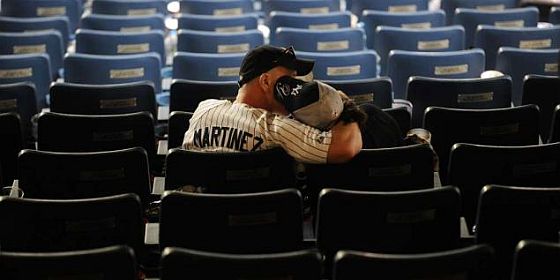 The Yankees came in to the playoffs with the best record in the American League, repeating as division champs and continuing a run of four straight playoff appearances. With the highest payroll in the playoffs the Yankees barely managed to get past the upstart Orioles before being blanked by a Tigers team with the worst record among all the American League playoff teams. The Wall Street Journal broke down just how bad the Yankees were in this series (hint: it was pretty awful) and speculation about the future of many star players has already begun. With the hot stove league only weeks away fans should prepare for rumors of player dumps and big dollar acquisitions. Potential free agents like the Rangers’ Josh Hamilton have to be overjoyed, as a desperate Yankees team will drive up their price tag, wherever they land. Meanwhile Yankees fans will shift their allegiance to the new Brooklyn Nets, the New York Giants, or whichever New York team is winning games at the moment, because, as the Post says, fair-weather New York fans don’t stick with losing teams.