Did Yao Ming Change the NBA? 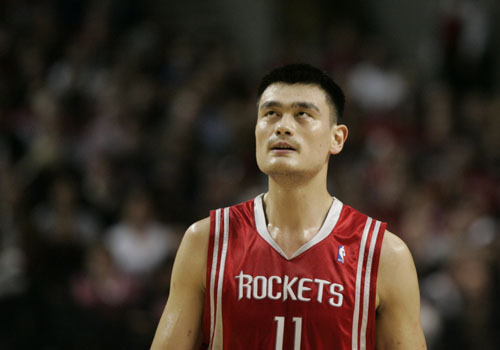 On Friday, news outlets announced that 8-time NBA All Star Yao Ming was retiring from the league due to ankle and knee problems. Ming, was drafted first overall by the Houston Rockets back in 2002 and during his short time in the league, became one of its global icons.

Before stepping onto American soil, Yao Ming had already dominated the CBA with the Shangai Sharks before he joined the NBA’s Houston Rockets. The Rockets seemed to be the perfect fit for the gentle giant and the team appeared to be ready to re-capture the glory years of when Hakeem Olajuwon was playing the position.

In his first season in the NBA, Yao was an intriguing story that the American media wanted to talk about; how could a 7’6″ man play in the NBA and how would he deal with the 24-7 American media coverage coming from an entirely different culture and knowing very little English.

At first, many NBA analysts and fans scoffed at the idea that Yao could have any real dent on the league. TNT NBA analyst Charles Barkley even bet Kenny Smith that he wouldn’t get 19 points in a single game during his rookie season. Mr. Barkley lost the bet and eventually had to a kiss a donkey’s behind in retribution. His first televised game against Shaquille O’Neal and the Los Angeles Lakers was one of the highest-rated NBA telecasts for that season and was a media frenzy. For once, there was man who was bigger and just as agile as Shaq and the imaginations of the NBA fan went wild to how many titles he could possibly win.

Since that point however, Yao’s NBA career had some bumps in the road, but he always seemed to overcome them and appear not to be discouraged. Yao was a constant at the NBA All Star Game and averaged nearly twenty points and ten rebounds during the entirety of his career. He was a different breed of center who forced opposing teams to change their game-plan on both the offense and defensive ends.

However, the one thing that will still haunt him like many NBA players is the lack of winning a single championship or getting to the NBA’s final round. During Yao’s career, the Rockets made it to the postseason five times and only once did they make it out of the first round. At that time, Yao was a force to be reckoned with and it appeared that he was enjoying himself. He would joke with teammates at post-game interviews and look to be a leader out on the court.

Some might argue that Yao never had the talent surrounding him to win a championship. He played with Steve Francis for only a couple seasons and a near-prime Tracy McGrady for only five years, but you always felt that the Rockets were one piece away from getting to that ultimate goal.

For Yao, arguably the greatest moment of his basketball career came in the 2008 Summer Olympics in Beijing, China when his Chinese team nearly made the medal round and pushed the United States in a highly contested game. Sadly, his playing in that game might have derailed his future in the NBA. Yao’s knees and ankles betrayed him much like many other formidable big men, but you never heard negativity from Yao, only optimism. His entrance into the NBA helped many Chinese basketball players gain an extra look from the association and most owe their current/future careers to Yao.

In a sense, Yao’s legacy in the NBA might be how he changed the league’s perception of the Asian basketball player and the legacy that Yao leaves the game is how the NBA global image has changed since the 7’6 big man walked through it.