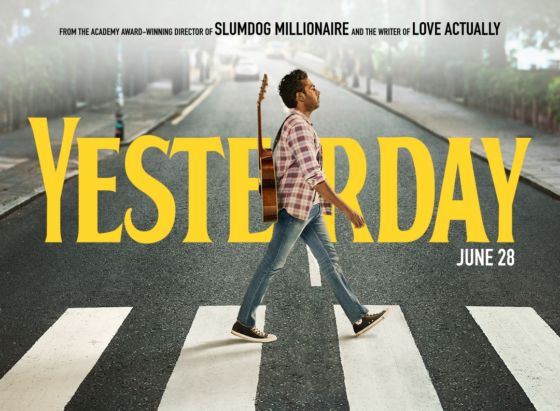 It’s quite a what-if: what would the world be like if The Beatles and their music didn’t exist? And if you’re a musician who seems to be the only one who remembers them, what would you do with that knowledge? As we find out, there’s fun and profit in it for Jack Malik (Himesh Patel) in Yesterday, a film which takes turns delighting us and skewering the celebrity machine which forces its way down our throats and into our ears and eyes on a daily basis. 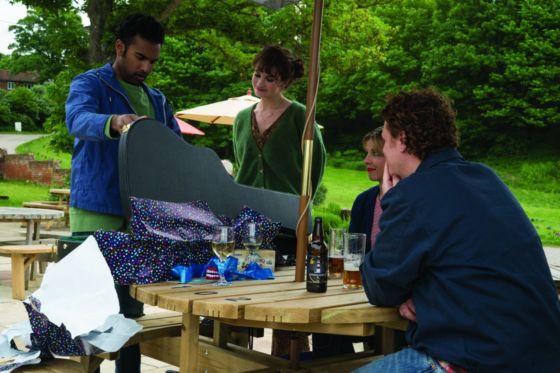 More importantly, it asks and answers the question of what would happen if The Beatles’ music was discovered in current times. How it’d be recorded, marketed, dressed up, and consumed, and who’d be there collecting the money when all is said and done. We’ve come a long way from road-worn artists being discovered by building up a grassroots fanbase and penning memorable songs on their own. Nowadays, pop stars are merely the conduit for whatever hot writing collective wants to leave their legacy on the world. 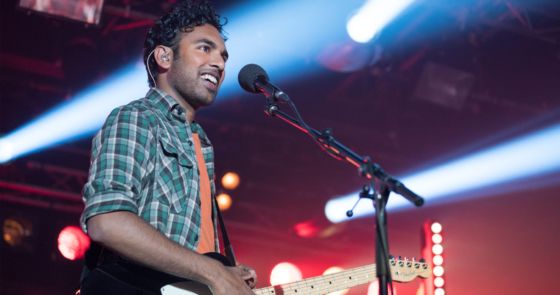 Leave it to singer/songwriter Jack to be the sole “survivor” of a worldwide blackout which erases The Beatles from the world’s collective consciousness and history. We don’t even know if the band members themselves exist; all we know is that seemingly no one besides Jack has the heard songs which have been so ingrained in world culture like “Let It Be” or “In My Life.” It’s a fact Jack takes quick advantage of, considering the songs he writes aren’t getting it done for him. 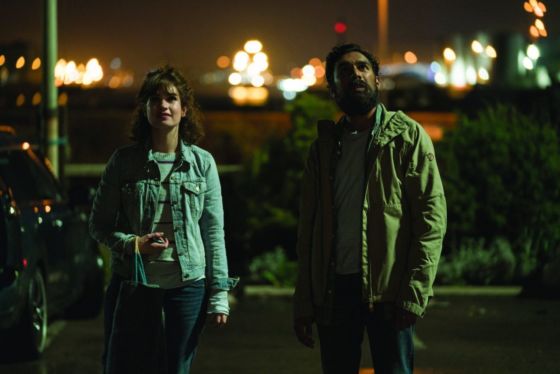 His pre-blackout life consists of local pub gigs and barely-attended tent slots at festivals, and his long-suffering manager and best friend Ellie (Lily James) is stuck watching him give up after years of trying to make it happen. Ellie’s set up as Jack’s work-wife, but Jack denies any kind of romantic spark between them. Screenwriter Richard Curtis – most known punchy and cute scripts like Four Weddings and a Funeral and Love Actually – seems to be at a loss for how to best set these two together, leaving it to director Danny Boyle (Trainspotting, Slumdog Millionaire) to fill in the gaps with Patel and James’ chemistry. Sometimes, it works; other times, we’re wondering if the script’s stilted effort for romance is just to provide a romantic thrust for the expected big declaration of love. (It’s a Richard Curtis script. You know it’s coming.) 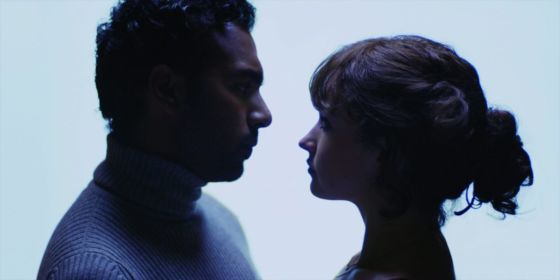 But the script can’t hide how well Boyle helps them work together, with Patel’s charisma and goofy charm pairing well with James’ cheer and humor. This is especially evident in the immediate aftermath of the blackout; there’s been a serious accident which lands Jack in a coma. When he comes to, she’s there waiting for him to wake up, and you can see a terrific bond between them as he discovers exactly what his damage is (it’s hilarious). But when he makes a Beatles reference she doesn’t get and shrugs off as a byproduct of his coma, there starts the tiniest inkling in his head that something just isn’t right. 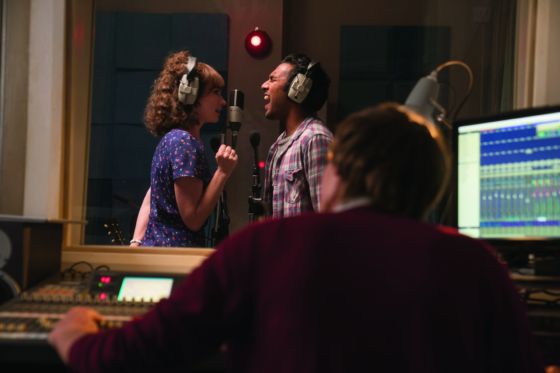 The Beatles, as we know them, were a product of hard work and dedication. All of it has gone unknown by this new world into which Jack’s woken, with Google searches coming back fruitless and records mysteriously missing from his collection. But wouldn’t it be nice for his career if he started recording and playing these songs, passing them off as his own? It doesn’t take years for him to be discovered; it feels like only mere days before a phone call changes his life forever. 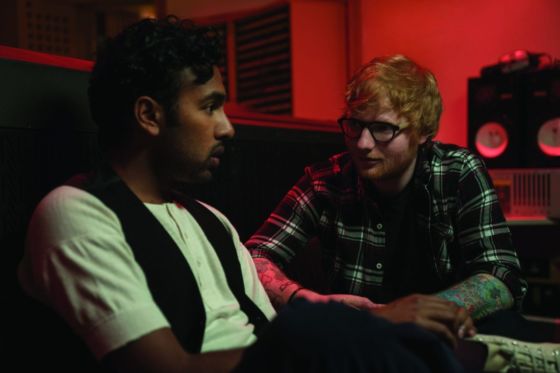 Soon, he’s swept into the largest kerfuffle he’s ever had to deal with – recording, image reworking, marketing, and touring with the man on the other end of said phone call, Ed Sheeran. It’s rather fun to see Sheeran provide this memorable self-parody; while it doesn’t send him up The Naked Gun-style, it does poke fun at his perceived offstage antics and personality. But he’s knocked right off the screen by sleazy, self-dealing manager Debra Hammer, played by an oily Kate McKinnon. 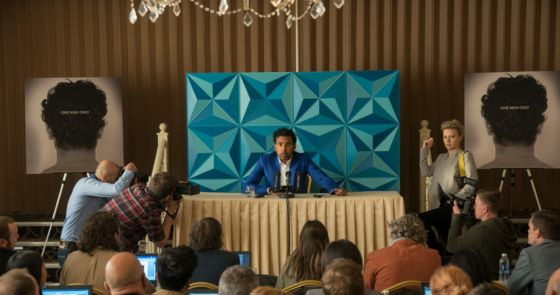 In a barrel full of snakes, she’s the most poisonous, asking Jack to make decisions for himself but not really allowing him any choice except the one she’s already predetermined for him. She’s the one The Industry looks to for The Next Big Thing, and she not only has Jack in her sights, but she’s already shot, bagged, and mounted him on her wall. McKinnon is at her absolute best, etching Debra out of bravado, smarm and false charm, quite a contrast from Jack’s humble, unassuming insecurity.

Known for visceral dramas and darker comic tones, Danny Boyle stays mostly light and in the light. He attaches us to Jack and makes us sidekicks on the adventure of his lifetime, using the kineticism of 28 Days Later, the fairer side of himself found in A Life Less Ordinary (I liked that one, damn it), and the bare honesty of 127 Hours. He makes this improbable situation feel absolutely normal yet fantastical, whizzing us through the whirlwind of self-promotion and Jack’s loss of humanity as he becomes a commodity. When he screams “HELP ME!” during a rooftop performance, the audience treats it as part of a song or as stage presence, not the anguished cry he’s truthfully wailing. 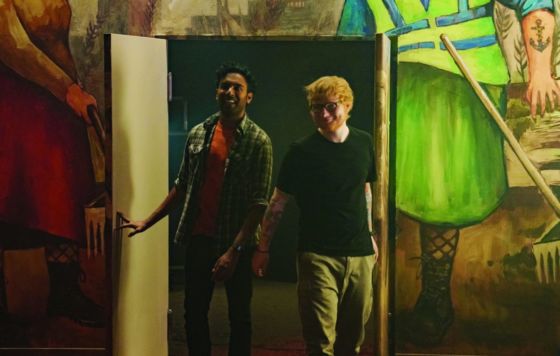 Moreover, the biggest joke of all is how we, in the era of Instagram and Twitter, would have treated the genius of The Beatles’ music. Instead of the music speaking to us, we’d be inundated by social media posts and overexposure; none of the attention would be on the music itself. Boyle makes sure almost no one is shown singing along to these songs; the fans only cheer and scream, not fully understanding the artistry before them. We have only the EXPLOSION which is Jack becoming Debra’s Next Big Thing instead of something worth investing the time to digest and internalize. 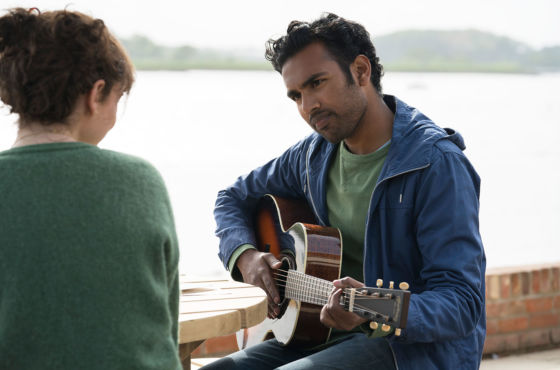 But The Beatles were so much more than music, as the film cements in its final act. Of course, there were hits, memorable interviews, and screaming girls; without the actual people who formed the band, they were just songs. A heartbreaking shift toward the end of the film brings it full circle, back to what makes sense and what’s right. It’s a moment only Richard Curtis could have written, and Danny Boyle fashions it into a solemn, highly introspective scene, resulting in five minutes of some of the most daring, yet plaintive cinema of either of their careers. 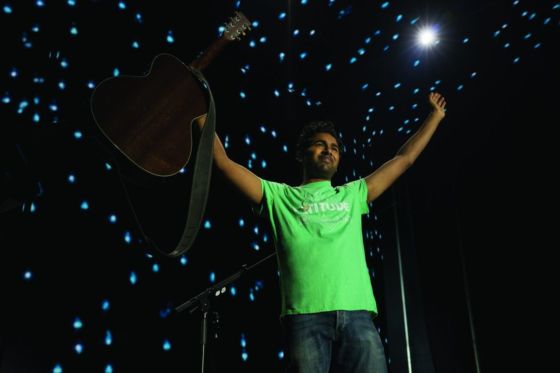 Yesterday is one of the most surprisingly delightful films in recent memory. Audiences looking for a mere lark will find themselves unexpectedly satisfied. Beatles fans of all kinds will be treated to a celebration of some of the best music ever made. Think of it as a cinematic hug wrapped up in the songs which make us sing. Corny jokes and scenes will bring laughter, tears will be shed, spirits will be lifted, and hearts will be full.

Yesterday is one of the most surprisingly delightful films in recent memory, a cinematic hug wrapped up in the songs which make us sing.