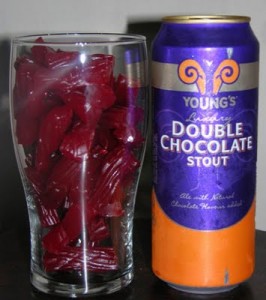 Information: (Site) “Unsurprisingly for a beer from the Young’s stable, Double Chocolate Stout has been recognised as an award-winning brew on several, occasions, including: Brewing Industry International Awards Gold Medal Winner 2000, Silver Medal Winner 2002 and Bronze Medal Winner 1998 and 2004. Luxurious and at the same time with a hint of decadence, Young’s Double Chocolate Stout has it all, delivering a satisfying, indulgent taste without ever becoming overly sweet.“

I’ve said it a hundred times, and there’s no reason why it shouldn’t bare repeating: I am a huge dark beer fan. I will go out of my way to find Stouts, Porters, and Dark Ales and Lagers, and it’s a welcome surprise when I find one I’ve never had, let alone seen in local shops. First and foremost, this particular beer comes in single 14.9 (440 ml) cans for a meager $2.89 plus applicable tax and deposit (we here in Michigan are the only state with 10 cents there… thanks a ton) so that’s not too bad for a really nice looking -and hopefully tasting- beer. Also, there is a serving suggestion right on the can as well: “For best results serve cool, but not ice cold.” This is a great motto for nearly every beer I can think of, whether ‘Triple-Hopped’ swill (you know who you are) or 30-dollar six packs: ice cold tends to mask and often ruin subtle flavors. There, don’t say you never learn anything from my reviews.

Now that’s thick. Well, maybe I’m just seeing things, put it certainly pours with the consistency of oil, and that, friends, is a sign of a good, chocolaty stout. The pour itself does that Guinness thing where it appears the bubbles are crawling the opposite way down the glass. In fact, that might be the first one I’ve seen not actually a Guinness do that. Cool. Nice thick and foamy head with a rich, delicious smell of mocha, malts, and chocolate.

Speaking of Guinness, the body and mouth-feel are very reminiscent of that particular beer. It’s just lightly carbonated like its brethren and very, very smooth. There is a trace of bitterness from the hops, but very little as the masking flavor is absolutely the chocolate therein. It’s so mildly sweet and earthy that you can really distinguish the chocolate from the background hops and slight yeastiness. It is very tasty and is made all the more chocolaty (if that’s possible) by bringing some air in while you sip. Doing so even brings out just a touch of coffee flavor as well. Very nice. I think the only drawback is that it is so similar to Guinness that drinking this makes you think too much about it. Pairing with a meal, as with most rich and dark beers, try it with roasted fare like a chicken or even barbecued ribs. Very tasty.

Rating: * * * *
Much like Guinness’s chocolaty brother, and just as tasty as that sounds.