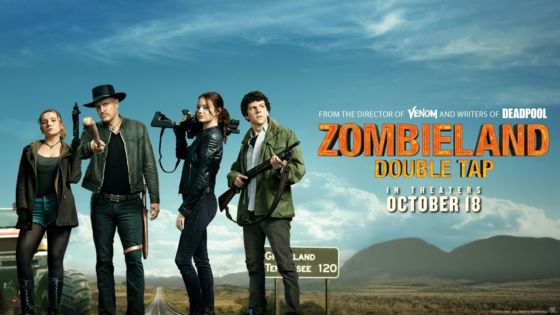 When you sit down for Zombieland: Double Tap, get ready and buckle in… for more of the same of what made the first film so memorable. However, that’s not a bad thing, as both the original and its predecessor are exactly what they need to be: a rip-snorting, vulgar-as-fuck, gleefully splatterific, and howlingly hilarious time at the movies. The main cast and crew are back for another swing at the zombie funnybone, successfully cracking it most of the way through. 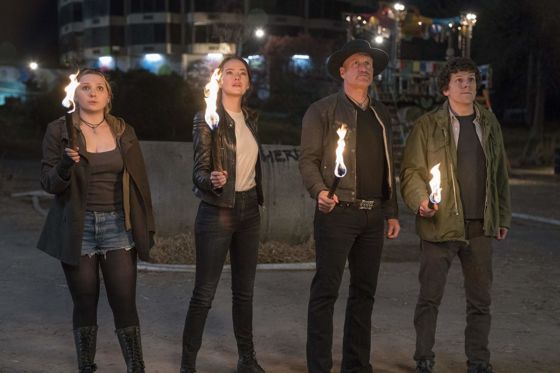 As always, there are some gags which will get overused to the point where even the film calls “Bullshit!” on itself. But that’s what we came here for, right? An homage that’s not entirely an homage; a sendup but not exactly; a near-remake but not quite. Returning writers Rhett Reese and Paul Wernick – accompanied this go-round by Dave Callaham – have taken the parts which worked about the first one, redressed them in new conflict, and added a few surprises to keep things fresh. 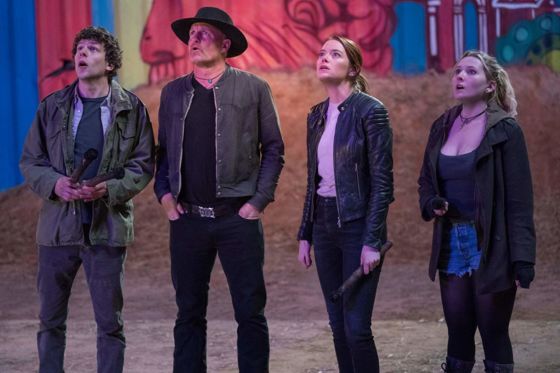 The basic moving parts are the same. Our narrator Columbus (Jesse Eisenberg) is there to welcome us back with his Nervous Nellie speaking tone and sort-of reassuring, self-deprecating banter. His love interest, Wichita (Emma Stone) and her sister Little Rock (Abigail Breslin) still somehow find ways to split with all the good weapons and the car. Finally, the man who commands our attention every time he’s on screen, Tallahassee (Woody Harrelson) is still the same the rootin’-tootin’, zombie-murderin’ redneck whose genuine care for these young kids is buried under fathoms upon fathoms of bluster and annoyance. 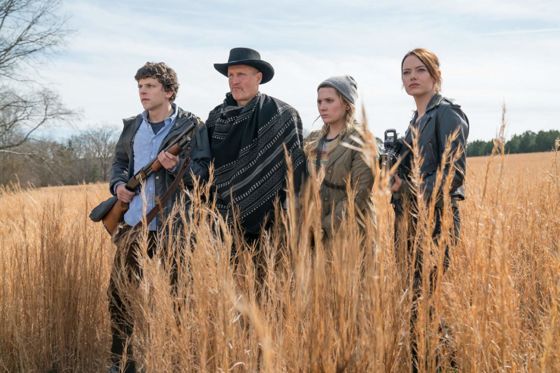 Our core foursome has found some way to function as a cohesive unit capable of handling small zombie hordes with axe-swinging, ammo magazine-tossing, blade-to-the-throat efficiency. Right from the off, echoing the use of their song “For Whom The Bell Tolls” in the original, Metallica’s “Master of Puppets” blasts through the theater speakers, adding ass-kicking urgency to visuals of our heroes slicing and dicing their way through a zombie horde (and the credits themselves) on their way to the White House. Their skills have improved since we last saw them ten years ago, a time differential Columbus makes sure to poke fun at in his own peculiar way during his narration. 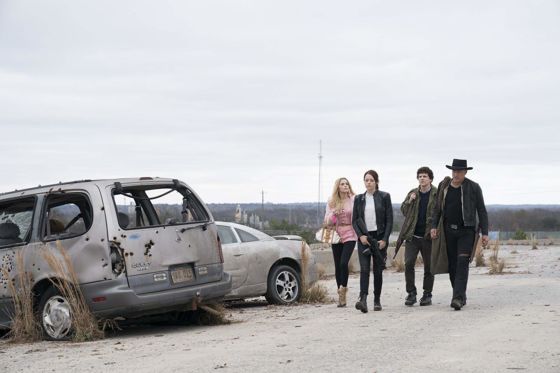 This thrilling opening at once seats us comfortably, like an old friend welcoming us into their home after a long time between visits. Sure, they look the same, but we all hope this friend hasn’t undergone significant changes, neither for the worse or better. We liked them just the way they were, and we want to pick up right where we left off, right? Zombieland: Double Tap *is* this friend, the one who left you laughing after the last beer at the bar, and now they’re back to offer you another cold one and resume the story they were telling all those years ago. 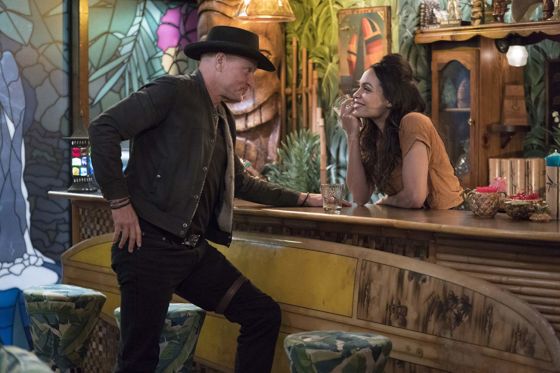 Director Ruben Fleischer makes sure not to deviate from the formula which worked so well the last time, almost to the point of failure. Here as well, we have Columbus wanting to further his relationship with Wichita, whose fear of commitment continues as a running theme throughout both movies. Also, Columbus is still obsessed with his rules, so much so that it’s starting to get on Tallahassee’s nerves again. Tallahassee, by the way, has been treating Little Rock the same way he’s treated her since they met ten years ago: like a little kid running through a candy store who doesn’t want to hear the word “no.” And Little Rock’s no longer a little kid; she’s a full-on young woman whose wants have outgrown their ersatz family. 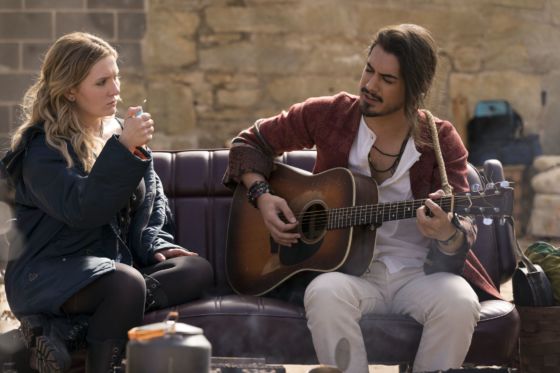 Something’s gotta change, right? Just like the first film, Wichita and Little Rock run off with the car – a heavily armored and weaponized SUV/limo called The Beast – and leave Columbus and Tallahassee to twist. After meeting Berkeley (Avan Jogia), Little Rock develops some plans of her own to go with Berkeley to Babylon, a hippie commune where no weapons of any kind are allowed. Which, of course, is stupid, especially considering the rise of a new type of zombie, nicknamed the T-800 – a nigh unkillable sort which doesn’t lie down permanently after a gunshot to the brain. Throw in ditzy Madison (Zoey Deutch) whose every word betrays how utterly devoid of intelligence she is, and you’ve got yourself enough go-juice to get you all the way through the closing credits. 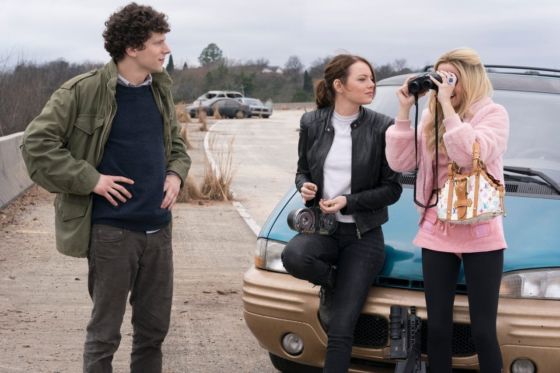 The actors continue as if they’d never left the set of the 2009 series originator, again carrying the weight of a delightfully absurd movie antithetical to their illustrious careers. As the trailer below is so proud of showing, all four of them have been nominated for Academy Awards (with Emma Stone being the only winner) for more serious work. Yet their goodwill in being party to a romantic zombie comedy – one very akin to 2004 rom-zom-com Shaun of the Dead – does not go unnoticed. Even more goodwill is fostered thanks to them performing and giving their all to this film instead of looking like they could be doing something better with their time. Honestly, they look like they’re enjoying every second of being able to let their hair down and cut loose, a chance not many actors of their status have or are willing to take. 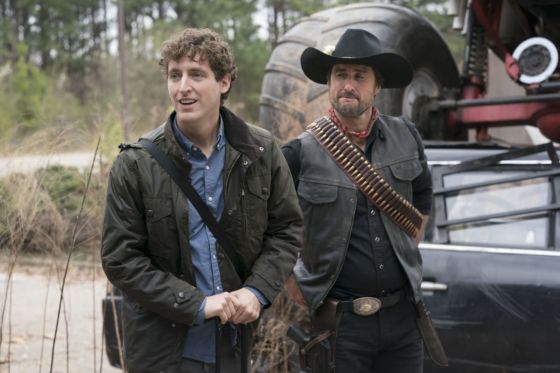 Fleischer keeps the film rockin’ and rollin’, even during the parts bogged down by too much dialogue, over-repetition of joke chestnuts, and the intentionally irritating (but kinda sweet) Madison, which Deutch exaggerates to the extreme. Of course, we want to see our heroes try new things and meet new people, but in the end, our attention is only spared for these four, no matter what or who gets in their way. As a point of fact, a scene with three relatively famous franchise newcomers gets overburdened by a sort-of competition to see which one can outdo the other, resulting in an oddly bland moment which only gets elevated by a terrifically-choreographed and kinetically-lensed action scene. Likewise, the mid-credits gag and post-credit PS threaten to overstay their welcome by being a little too much, but there’s some excellent spectacle to behold in the mid-credits interlude. 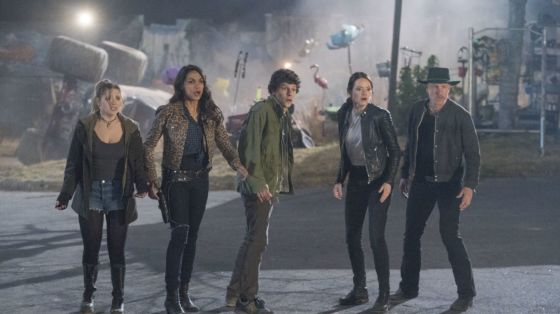 For every dropped ball which doesn’t hit its mark, there are at least six things waiting to pick it up, and that’s where both Zombieland films excel. Each revels in irreverence and fantastic snark; anything less or more out of this sequel would have been wrong. Writers Reese, Wernick, and Callaham find ways to make the banal special – no mean feat during a zombie apocalypse, but they don’t treat the little things as saccharine or a Hallmark moment. Instead, they do what they’ve always done, exemplified best by Reese and Wernick’s original Zombieland and Deadpool franchise scripts: tear right into what’s at hand and go for broke, leaving no stone unturned and no sacred cow untipped. In this endeavor Zombieland: Double Tap gets its pitch just right, standing proudly alongside its predecessor as the perfect two-parter.

Zombieland: Double Tap may be a simple case of "just more of the same," but that's NEVER a bad thing with this franchise.