Gadgets > Games > How Zynga is Taking Over the World

How Zynga is Taking Over the World 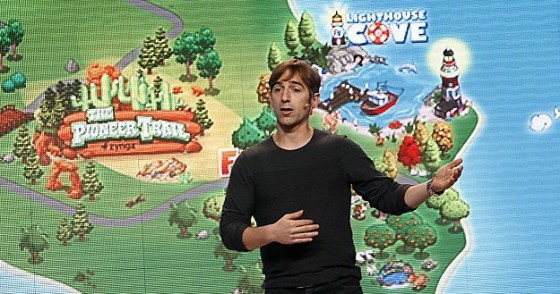 It all started innocently enough… one would think. You see, way, way back in 2008 (remember that wacky decade?) the Zynga company foisted upon an unsuspecting Facebook public the very first game ending in the eponymous ‘Ville called YoVille. It was good; it was fun; it allowed for thousands of people to ‘hang ot’ in the virtual Zynga world while they arranged furniture, worked at bizarre factories and shops — all the while earning virtual money, YoCash, I guess — and mingled with everyone else who played. And this, friends, was the framework for the entire basis of Zynga’s existence. Now they’ve got you by the balls, my friend… by the balls.

But which games are the most soul-sucking? Well, lucky for us, there are five. Five games that have literally turned millions and millions of participants into lifeless, mindless zombies with nothing more left in their brains that the insatiable desire to check into their games and find out their… uh… I’ll be right back, I have to… um. Pants.

This particular entry into Zynga's repertoire features its first foray into combat strategy. In fact, much in the vein of Reversi (or Stratego), the player gets to 'Island Hop' from Empire to Empire taking over each area as his or her own. It's violent, its brutal... oh who am I kidding: it's cartoony graphics and silly adventures that form the linchpin of every Zynga Game. But hey, it's the fun of it that draws you in... ya know?

I will freely admit that this is the current game in which I'm full engrossed. There's just something about existing in the realm of castles and swordplay that really seems to appeal to the age-old Dungeons and Dragons player in me. Oh sure, there aren't any real fights... at least so far. But you do get to banish the Beasties created by the Gloom, which more or less represents the lands you haven't explored yet. You build foundries of sorts that can make everything from stone blocks to fences; kitchens where you bake corn bread muffins and carrot cakes; clockmakers, fisheries, maiden's towers and everything in between! Do I sound excited? It's cuz it's fun, dammit! Oh, and you have to farm... which really seems to be the lifeblood of every one of Zynga's games, too.

FarmVille seems to be the one Zynga game that everyone compares all of their other, more recent attempts. Yes, it's true, that once again all of their newer games do use the same basic farming ability used to plant, tend, and harvest crops for use in everything else throughout play. But FarmVille, at its core, is very simple and is, in all reality, nothing more than watching your crops grow... and hoping that they just might grow... FASTER! It is aggravating! Look, friends in the game, would you please... PLEASE just frikkin help my shit grow! Come on, people! You can't possibly have anything better to do! Just do what... uh... yeah. Now you can fully understand the absolute strangulation of being a part of one of these games. Dammit!

This particular selection takes place in the here and now and allows you to design (more or less) and build your own operating city. At its very minimum, it is a collect-coins-plant-crops-earn-new-shit game, but it does throw in a twist or two that the other's do not: actual companies. That's right, among the fake shipping lanes, the game-made car dealers and candy makers, throughout the phony sky rises and massive hotels, you can acquire the opportunity to place such actual things as McDonald's, Best Buy, and a Capital One Bank! Now that's pretty cool, right? Unless you actually work at one of those brands, in which case, I suppose it would be really stupid. Anyway, just as always, unless you have a bucket-load of friends playing, too... there's not much fun to be had. Sadly.

Who doesn't love the game Scrabble? It's a huge hit and it's played both for recreation and for Championships. Scrabble has been around for a good long time, so it was only a matter of fate that Zynga would eventually get their hands on it and give it a nice little twist. You see, the whole point of playing these games on Facebook is to chat it up with your friends and spread a little good-natured ribbing around when you drop a fat piece of verbiage like 'quiche' all up ons. And with this game, there is no time limit so you can toss out your word and maybe wait a day or two for your friend (or, ideally, 'friends') to spout their bit of American English knowledge. There is no farming here, no coin collecting, and no fucking building: it's just good, clean, wordsmithing! Just don't cheat. No body likes a cheater who consistently uses words like 'suq' and 'qat'. Like me. I use 'em a lot.