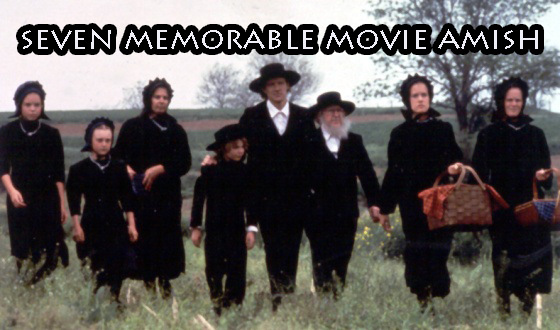 Plain clothes. Long beards. Horse and buggy. Rejection of modern conveniences. Staunch devotion to God. Nobody milks cows, churns butter or raises barns quite like the Amish. You gotta hand it to them for maintaining their way of life in a time and age when organized religion has come under fire and vacuous non-talents like Kim Kardashian are famous. They are a fascinating breed, to say the least.

Over the years, Hollywood has taken a crack at investigating and/or lampooning the Mennonite lifestyle to varying degrees of success. Be it drama, comedy, action or horror, the Amish have made their presence known on the big screen. Here are seven of the most memorable. (And I’m talking real Amish characters, not characters pretending to be Amish.)

7) Samuel Yoder – For Richer or Poorer

Jay O. Sanders dons a hat and beard to play straight man to Tim Allen, a on the lam real estate mogul hiding out with his wife in Lancaster, Pennsylvania. This flick is hardly a piece of cinematic gold, but it’s good for a few laughs and Sanders looks and acts the part of an old school Amish farmer.

Dana Delany is Martha, an Amish woman who lives out her mundane existence drinking, smoking and cursing, while dreaming of seeing a stage play. It’s an odd little movie; not bad, not great. Look closely for Robert Romanus — Mike Damone from Fast Times at Ridgemont High.

This B-horror/sci-fi film is a steaming turd. It’s impossible to explain the plot because what little there is makes zero sense. That being said, it has good Amish and bad Amish roaming a post-apocalyptic countryside. Cody, a good Amish, picks up a pair of six-shooters and takes on a gang of bad Amish. It’s The Outlaw Josey Wales, except stupid and largely unwatchable. (Sorry, no audio on the trailer. Not that it matters.)

Little Lukas Haas became a star playing Samuel, a young Amish boy who witnesses a brutal murder while taking a pee in a Philadelphia train station. His wide-eyed identification of the killer to Harrison Ford is a scene to remember from one of the ’80s best movies.

Seth Green steals this underrated ribald comedy playing Ezekiel, a sarcastic Amish who excels at fixing cars and being a king-sized smartass. He only gets a few scenes, but shines every second he’s on screen. If you’re a fan of Farrelly Brothers type gags, like glory holes and public erections, you’ll dig Sex Drive.