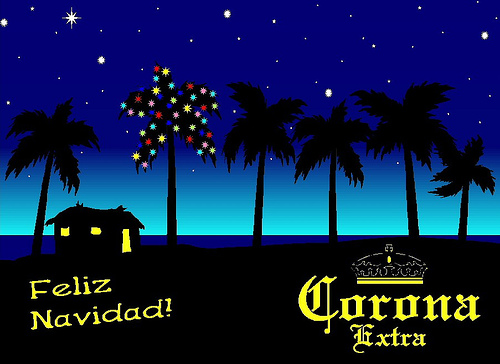 With all due respect to the Super Bowl, we’re of the opinion that Christmas is the best time of year for advertisers to shill their products and services via television commercials. Falling snow, twinkling lights, ornately adorned trees and fat guys in Santa suits eases the pain of ponying up hard-earned cash for crap we don’t need. For better or worse, commercials have been embedded in our memories throughout the years, especially during the silly season. Here are ten that will undoubtedly ring a bell (get it?). Many of them are still in use today in some form, and most are for food or beverages…

Long before Best Buy, Apple Stores and the internet, one of the only places you could score a new computer was Radio Shack. Needless to say, those were dark days. Owning a Tandy 1000 then was the equivalent to having an iPad now. Behold, how the bread-winning father is denied video games by his financially responsible wife and studious daughter! Ho, Ho, Ho.

The Polar Bear campaign isn’t reserved strictly for Christmas. It’s more of a winter thing. However, when I think animated bears guzzling bottles of tasty high fructose corn syrup, I think Xmas. Several of these ads stand out, but my personal favorite is the gathering to watch the Northern Lights. It screams festive.

Ah yes, playing the sentimental card is a staple of any good holiday commercial. No wealthy corporation bent on world domination knows this better than Folgers coffee. During the ’80s, they tugged at millions of heart strings by sending Peter home for a surprise visit. Nothing says Christmas like a steaming cup of instant joe. Yummy.

Christmas is all about the spreading of joy and the consuming of processed hamburgers. Well, it is if you work in the McDonald’s corporate offices. New ads to lure children into a life of poor health and chronic obesity used to be subtle and, dare I say, whimsical. What young boy doesn’t want to ice skate with a grown man dressed in a clown costume? Happy holidays.

Originally aired in 1987, this classic from 7-Up was used repeatedly deep into the 1990s. It features some elves reacting how we all do as children when we discover there is measurable snow on the ground. Sadly as adults our reaction to snow isn’t nearly as joyful anymore.

Any Don Draper worth his salt will tell you it’s often the simplest ideas that prove to be the most effective. Hershey’s hit the Yuletide jackpot when they unleashed an orchestra of chiming kisses set to “We Wish You a Merry Christmas.” I love how the sliver one “conducts” the others. This timeless winner still gets aired today.

The ill-conceived jingle being sung is atrocious, but the visuals more than make up for it: a convoy of lighted trucks traveling cross country to usher in the holiday season. Despite a underlying theme that Coke is invading the country with an army of possessed big rigs, I always feel cheerful when I watch this. It’s hypnotic, man.

Before deciding to get plastered and clumsily hit on the cute new girl at the office Christmas party then get arrested for DUI while weaving your way home in shame, think what would the Clydesdales do? They’d eat some hay, take a dump and go to sleep. Do likewise, friends. Nobody wants to spend Christmas in the pokey.

The first Christmas commercial I recall seeing as a kid was this one. I didn’t even know what the hell an electric razor was, but the sight of Santa sledding across a winter’s wonderland struck me as awesome. What can I say, I was easily impressed as a wee boy. Ironically, I bought a Norelco years later and found it to be less than satisfactory. Damn you misleading advertisers! Damn you to Hell!

This is the only commercial I can’t do without every year. Luckily, the braintrust over at Corona have kept it running since its inception, and done so without changing it one iota. I want to move to that little shanty on the beach and decorate my palm tree and whistle “O Christmas Tree” in the tropical night air. Who needs snow anyway?