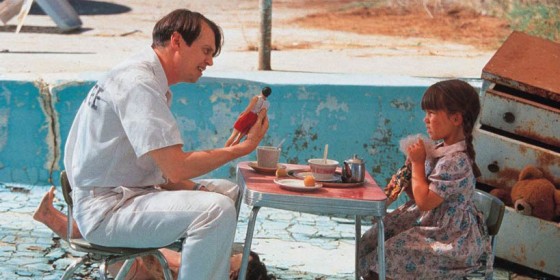 What would cinema be without those infamous nut-jobs? Pretty darn boring, in my humble opinion. Like the prophetic crooner and supermodel seducing Seal is fond of saying, “we’re never gonna survive, unless we get a little crazy.” In keeping with that sentiment, I thought I’d call attention to some of my favorite movie psychos and weirdos. Before I get to it, I’d like first to establish a criterion. Slash and hack horror killers like Jason and Michael Myers are disqualified. I like my oddballs grounded in reality. In other words, no unstoppable madmen impervious to bullets, fire and falls from great heights. The following kooks are humans, not immortal beings. Break out the mental illness medication for this bunch.

Ripper, played by Sterling Hayden, is the prototypical no guts, no glory Army General. This cigar smoking lunatic isn’t too fond of the Commies. In fact, he’s convinced the Russkies have successfully infiltrated his “bodily fluids.” Ripper’s solution: Nuclear annihilation. That’s my kind of military leader.

Jeff is the insane mastermind behind the mysterious “Army of the 12 Monkeys” group. Time traveling convict James Cole believes the Monkeys to be responsible for wiping out mankind with a deadly virus. Oops! Jeff is too unstable to engineer such a nefarious plot. His grand plan involves springing animals from the zoo. Brad Pitt received an Oscar nomination for portraying the loony Goines.

8) Jigsaw from the Saw franchise

Jigsaw, aka John Kramer, is your typical family man. Then he learns he has terminal brain cancer. Then his unborn child dies. Next stop) Psychoville! Dedicating his life to testing people’s will to live by imprisoning them in horrific traps that often end in death seems a bit extreme. But hey, who am I to judge?

7) Harry Powell from Night of the Hunter

Robert Mitchum played some creeps in his day, but none creepier than Harry “Preacher” Powell. Harry’s hobby is marrying widows for their money, then murdering them. Preacher also quotes Scripture, sings hymns and hunts children who know the whereabouts of hidden loot. The Night of the Hunter is over fifty years old, but it still ranks as one of the most disturbing films I’ve ever seen.

Old Travis doesn’t handle rejection too well. After beautiful Betsy dumps him, Bickle buys a crapload of guns and writes up a hit list. He wants to rid the city of crime, but attempting to assassinate a Presidential candidate probably isn’t the best strategy to employ. Oh well, points for trying.

5) Stansfield from The Professional

How can you not love Gary Oldman? The guy brings the goods every time out. Stansfield isn’t your ordinary corrupt cop. The dude is a pill-popping maniac who has zero problem blowing away kids with a shotgun. The Professional is hardly a great film, but I’ll watch it all day long just to hear Oldman scream, “EVERYOOOOONEEE!!!!”

Robert De Niro hams it up big time in this zany remake. Max Cady is a walking freak show. A tattooed tough guy who gets his jollies beating and raping women, smooching underage girls, terrorizing rich lawyers, and slicing up private eyes with piano wire. He looks snappy in IZOD sweaters, too.

3) Hannibal from Silence of the Lambs

It would easy to put Lecter in the number one slot, but I don’t do easy. Lecter is without question the most sophisticated, cunning, and demented crackpot on this list. Anyone who consumes vital organs on a regular basis clearly has issues. I hear he puts on one helluva of barbecue, though.

2) The Joker from The Dark Knight

What makes The Joker so frightening is that he places no value on human life, most of all his own. He truly wants Batman to kill him. I don’t need to rehash Heath Ledger’s incredible performance. It speaks for itself. I’m not as enamored with The Dark Knight as others, but Ledger’s Joker makes it must-see viewing.

Fight Club is my favorite movie from 90s. The screen chemistry between Edward Norton and Brad Pitt is flawless. If a bullet is the only way to halt the voices in your head, you have some serious mental problems. Does anyone really know Tyler Durden? No. Tyler Durden doesn’t even know Tyler Durden. That’s enough to crown him the King of movie madmen.