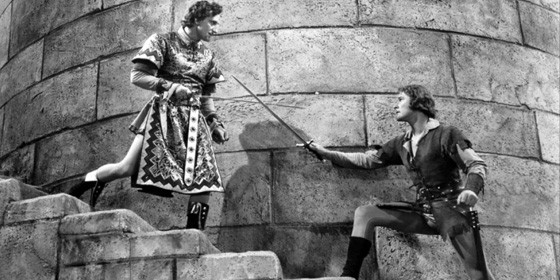 Long before gun powder was invented, the world’s greatest empires were built on steel. Be it Alexander the Great, Ancient Rome or the Ming Dynasty, conquering armies used a blade to spill blood on the battle field. The sword may be an antiquated weapon in the 21st Century, but meeting your end via a foil still holds a high degree of honor. Especially in the movies. Big screen duels make for excellent entertainment. Whether it’s a period piece, horror/sci-fi or comedy, watching two combatants proficient in the art of swordplay rarely disappoints. Here are ten battles that fit the bill. (Note to all Star Wars geeks. Lightsabers are not swords.)

Big Trouble in Little China rules for a myriad of reasons. Hilarious hero, crazy plot, intense action and cool special effects are just a few. Throw in a climatic mid-air cutlas clash and you can’t really ask for much more. Right?

Blade is somewhat responsible for jump-starting Hollywood’s renewed interest in superhero franchises. A vampire hunter who is half-bloodsucker. Whoa. The final showdown between Blade and Frost has a little bit of everything, including the clank of metal.

To be fair, Hero is packed with several worthy engagements, so choosing just one wasn’t easy. The library scene actually features a pair of bouts, but it’s the one between Nameless (Jet Li) and Moon (Ziyi Zhang) that stands out.

The Pirates of the Caribbean films were a pleasant surprise. Something based on an amusement park ride shouldn’t be remotely entertaining, but the filmmakers did a credible job. As the third chapter wraps, the devious Captain Jack goes head-to-head with the vile Davy Jones. It’s an impressive scene.

Crouching Tiger Hidden Dragon‘s “Green Destiny” has to be one of the coolest names for a sword in cinema history. The tree-top confrontation in the bamboo forest isn’t the most exciting, but it is beautifully filmed and beyond amazing to watch.

5) MacLeod vs. The Kurgan

The original Highlander still ranks pretty high on the kick ass scale. Clancy Brown’s inspired performance as The Kurgan is both frightening and funny. Christopher Lambert didn’t do much after this, but at least he can say that he was the first to be the last of the immortals.

Gladiator is all kinds of glorious. Bloody battle scenes, doomed hero, stunning soundtrack — it has it all. Russell Crowe and a pre-nutty Joaquin Phoenix both deliver the goods. In particular, during the classic Coliseum combat. Gladiator is easily one of this decade’s top films.

The Pythons know funny like few others. The needlessly violent joust from Monty Python and the Holy Grail still holds up, despite being 40 years old. Whatever you do, don’t eff with King Arthur. And remember, the Black Knight always triumphs.

The Princess Bride is as close to a perfect film as you’ll find. The story, dialogue, acting and directing are all first-rate. Its centerpiece scene is one of the finest duels between master swordsmen ever put to film. Up until a few years ago, this would have undoubtedly topped this list.

The logistics involved in shooting this melee from Kill Bill must have been a nightmare. The Bride – dressed in a bright yellow motorcycle suit – takes on O-Ren Ishii’s gang, the “Crazy 88.” Single-handedly slicing and dicing forty to fifty guys in seven minutes takes the title, for now.