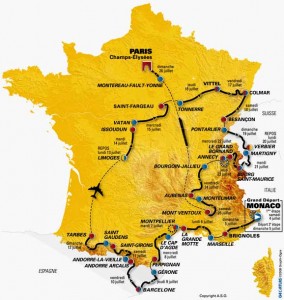 Tomorrow marks the start of the 96th Tour de France, and while I know cycling is far from popular in the United States, it is a great sporting event to watch. Yes, cycling (like most sports) is embroiled in drug scandals, but there’s something exciting about a grueling event that tests strength, endurance, speed, and a little bit of luck. And best of all, there’s no bitching about referees. It’s simply whomever crosses the line first. This year’s race starts on July 4th along the Mediterranean coast in the principality of Monaco. I know most people associate the Tour with the country of France, but every year the race dips into several countries. This year is no exception as Monaco, Spain, Andorra, Switzerland, and Italy will all host portions of the race in addition to France (The Italian portion helped knock out Alejandro Valverde). After leaving Monaco, the cyclists will travel in a clockwise direction, hitting the Pyrénées and eventually the Alps in the three week trek before finishing on the familiar Champs Elysées in Paris. 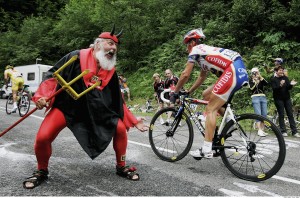 You can check out the coverage on Versus, and see how the race progresses. Virtually everyday there is racing, and jerseys are awarded to the overall leader (yellow), plus for sprints (green), mountain finishes (polka-dot), and young rider (white). In fact, there are a bevy of awards each day, making each stage an interesting watch with awards on the line. Plus, if you’re into fantasy sports, you might also check out the fantasy Tour for selection of riders from the 20 teams. It’s just a way to add more interest to the sport. At least until you see the tradition devil show up (and he will). Unless you’ve been living under a rock the last few months, you know Lance Armstrong is attempting to make a triumphant comeback this year. But here are seven other big names to watch:

1. Alberto Contador (Astana) – the odds on favorite and 2007 champion returns to the race after a one year hiatus. He is riding for team Astana, which features Armstrong as well as former top-three finishers Levi Leipheimer and Andreas Klöden. Having won the Tour in addition to the Giro d’Italia and the Vuelta a España, the Spaniard boasts a résumé that is largely unparalleled in cycling. At 26, he’s also on the top of his game. No doubt he would like to add another Tour de France to his collection of trophies. He’ll certainly be the man to beat in the mountains.

2. Carlos Sastre (Cervélo TestTeam) – the defending Tour de France champion remains a threat to repeat, but is largely seen as a longshot due to increased competition and a weaker squad. He rode last year with the Schleck brothers and a stacked CSC-Saxo Bank team, but has broken off on his own with Team Cervélo. A notoriously good climber, this year’s lack of time trials should help Sastre minimize his damage on the speedier portions of the course. The Spanish climbing specialist could become the first rider to repeat since Armstrong retired.

3. Cadel Evans (Silence-Lotto) – the Aussie has twice placed second overall, but failed to seize the overall Maillot Jaune (yellow jersey) in last year’s watered down field. Well, that’s not entirely true. He did wear the yellow jersey for the first time ever, but lost it in the mountains and failed to regain it with a lackluster individual time trial. That was probably his best shot at glory, but he remains an excellent rider and all the ingredients are in place for victory. Although, the former champion mountain biker will have to have a better showing in the mountains to do so.

4. Denis Menchov (Rabobank) – the Russian has always had whispers of future greatness, particularly after capturing the 2003 white jersey, but has never quite been able to put together that one great Tour. He’s twice finished in the top 6, and after a fourth place finish last year, is again looking strong after winning this year’s Giro d’Italia. A strong team and good form could lead to his best finish ever.

5. Andy Schleck (Saxo Bank) – along with his brother Fränk, Andy captains a loaded Saxo Bank squad. They both also hail from Luxembourg, a tiny country that boasts a pretty impressive population to cyclist ratio that also includes Kim Kirchen. Fränk finished 6th in last year’s Tour, but it is Andy that’s seen as the biggest threat for victory. He finished 12th overall last July, but captured the white jersey as winner of the Young Rider classification and capped off a successful year by finishing 5th in the Olympic Road Race competition. Andy just recently turned 24, and is a favorite to repeat as Young Rider if not move up to greener pastures. The lack of time trials in this year’s race no doubt thrills both Schlecks, who do their best work out in the mountains.

6. Mark Cavendish (Columbia-High Road) – hailing from the Isle of Man in the British kingdom, Cavendish rose to prominence as a sprinter and has blossomed from there. He burst on the seen in last year’s Tour de France, winning four stages before retiring to prepare for the Beijing Olympics. The proclaimed fastest sprinter in the world rides both road races and on the velodrome, and is the favorite to win the green jersey despite Tom Boonen’s last minute entry.

7. Roman Kreuziger (Liquigas) – the Czech professional is an excellent climber and a decent bet to capture the polka dot jersey as King of the Mountains. Last year’s winner, Bernhard Kohl, tested positive for banned supplements, and the field is wide open. Carlos Sastre is another potential threat, but he seems more likely to focus on defending his yellow jersey than winning this mountain crown. At 23, Kreuziger’s best years are still to come.

So there are seven names to watch in addition to Lance Armstrong. You might notice the lack of French names, which is no surprise as the French haven’t been strong contenders for the overall classification in some time. Whether you’re a fan of Italy, America, Britain, Luxembourg, Spain, Russia, Australia, or some other country, there’s plenty to cheer for. Tune in this year and see how it all shakes out.