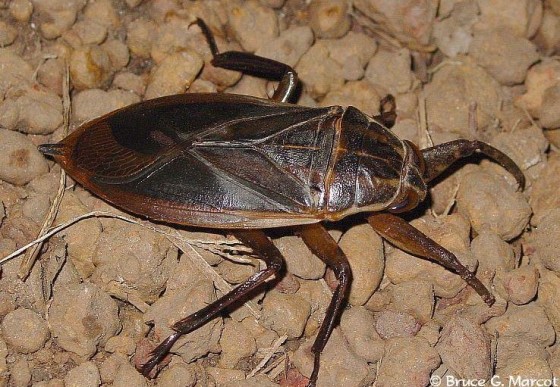 Sure, giant insects of today are no match for those Prehistoric beasts that roamed right near the end of the dinosaur’s tenure, but they’re still pretty damn huge. Speaking of bugs the size of small cars, they did in fact inhabit large chunks of the planet several million years ago, but scientists are pretty sure that they succumbed to the just-freshly-evolved bird species who gorged themselves on them. I don’t know how much of that jives with me, because what I’ve seen of those bugs, some were big enough to carry a standard human off, let alone many of those birds that weren’t much bigger than chickens. Oh well, maybe it was a more epic battle than I’m picturing. Where was I… oh right: Big ass insects!

Before I present the list and a few videos that are going to literally make you itch like never before, keep in mind I said INSECTS. Very specific, that… so don’t expect centipedes, millipedes, or, especially, spiders. Because they aren’t insects. Okay, moving on…

So the Goliath Beetle can get to roughly the size of a pee-wee football. Let that sink in a second, because I'm also going to tell you that these guys are pretty damn heavy. All things being equal, they're largely considered the weightiest bugs currently on the planet. Even the larval stage can get up to 3.5 ounces (adults about 2). For comparison purposes, that's about the weight of your mouse. Imagine that inching its way across your arm while your camping on an expedition in Africa's Tropical Forest. Fortunately they're harmless unless you're made out of fruit or tree sap.

Wait, what? A tree lobster? Yup, that's what this species of stick insect is affectionately referred to as. Why? Well, it sort of, kind of, looks like one without the claws. Now that mess would be scary. Anyway, these massive gross looking monsters were thought to be extinct on the Lord Howe Island where they lived, thanks to some black rats. And only on that island, I might add. But in 2001, some scientists discovered a few dozen still kicking around and have since successfully bred thousands. I'm expecting them to take over the world any day now. Good for them.

Many of us have seen a stick bug a time or two hanging around on a tree, or maybe in an outdoor zoo. They're pretty cute and maybe the length of a pencil at the longest. Well, imagine that three times bigger and about as thick as a rolling pin. Yeah, now you're squirming a bit. This stick insect actually looks like a wandering branch and can get to lengths of an adult human's arm... sometimes even LONGER. But, alas, even for a bug so ridiculously big, it still only feeds on flora, so you're safe. For now.

Ever seen the movie 'The Deadly Mantis'? Well, if you want to, here's a LINK to the MST3K and far better version. Why do I bring this up? Because this thing is actually, almost really real. Well, sort of. Yeah, the Giant Asian Mantis is pretty stinkin' big, and it looks like it's staring right into your soul, but I don't think it's quite big enough to smash buildings. Maybe a small thatched hut, but that's about it. However, they can get to around a foot long and do, quite regularly, feed on babies. Or maybe they misspelled 'birds and rodents'. I hope they did.

Finally we've come to a bug that not only features sabers jutting from its arms, but also readily earns its nickname, 'Toe Biter'. Sure, it might be just a toe, but what if more than one sinks its razor hooks into you? Yeah, now we're talking supreme agony and openly weeping like a little girl. Did I mention that they live in murky, still water so you can't even see them flying right at you? Oh, and some places on earth actually eat them. I think it's more for self preservation than nutrition, but what do I know.

When you think beetle, typically you think small, trundling, goofy looking things that can easily be avoided with a finger flick or a well-placed boot. But not this terrifying beast. This thing could comfortably wear a saddle and carry supplies across a desert. They can grow to over a foot, and just pretty much wander around looking for fights with larger animals, such as humans in full-battle regalia. They can be aggressive, you see, since they know they run the joint and that they have incredibly strong pincers on their face like a set of pneumatic weed cutters.

As gigantic, horrific, creepy-looking crickets go, this one is the most of all of those things. Imagine a bug chirping outside your window that could, on the high end, weigh almost 3 ounces and be almost 4 inches long. Now imagine going outside with a broom in hopes of locating that thing and running in terror as it turns and makes the 'shhhhhhh' sound as it holds an index finger to its mouth. Okay, that couldn't happen since these things don't have wings. Or probably fingers, for that matter. But they are excessively repulsive and likely still want to kill you for reasons only they know.

Finally, an insect that could easily be hired as a trained assassin to seek out and destroy evil Dictators. They are the single largest species of Hornet and they do not intend to lose that title any time soon. Of course it helps that they're 2 inches long with 3-inch wingspans and a stinger the size of a large rose thorn. Apparently, according to those 'in the know', the pain of the sting feels like being jabbed with the pointy end of Satan's tail. I'd imagine that'd hurt like Hell... see what I did there? Anyway, despite the fact that the adults can and will kill you twice before you even know they're there, some folks harvest the fluid that the larva produce and sell it mixed with energy drinks for stamina and virility. Those people are both Japanese and fucking dumb.