Sadly, the 2010 Fantasy Football season is over. If you were fortunate enough to capture fake team glory, congratulations. If you are wallowing in misery after watching your championship hopes explode in a ball of fiery disappointment, I feel your agony. It really does suck when months of studying matchups, engineering trades and tirelessly working the waiver wire goes for naught.

I fared pretty well in 2010, which has me already thinking about 2011. I like to get a jump on the upcoming season. Just like Rex Ryan, who has already declared his Jets the 2011 and 2012 Super Bowl champs.

Anyway, the early bird catches the worm approach has served me well in the past, so I see no reason to alter my routine. With this in keeping, I am prepared to unveil my initial mock first round for the 2011 Fantasy Football campaign. Here it goes.

1. RB Adrian Peterson (Vikings) – I’m troubled by the Vikes quarterback picture. Joe Webb is a slightly better version of Tarvaris Jackson, which is similar to saying that Hepatitis B is slightly better than Hepatitis C . “All Day” had is best touchdown production (18) with a rejuvenated Favre under center in 2009. Despite the QB quandary, I still believe Peterson is the safest pick in the top spot. He runs harder than any other back in the league and has battled through injuries without missing many games. He also seems to have remedied his chronic fumbling woes, losing only one in 2010 after dropping 13 the previous three years.

2. RB Arian Foster (Texans) – I don’t care who’s coaching the Texans in 2011. Foster should and will be the focal point of the offense. Over 2200 total yards, 18 touchdowns and 66 catches are elite running back numbers. Could he be a one-year wonder? Sure, there’s always that possibility. But like Peterson, Foster runs with power and speed. With the Schaub/Johnson combo keeping safeties in coverage, it will be tough to stack the box. Still need convincing? He caught a pass in every game and was held under 100 total yards just three times. I’m sold. 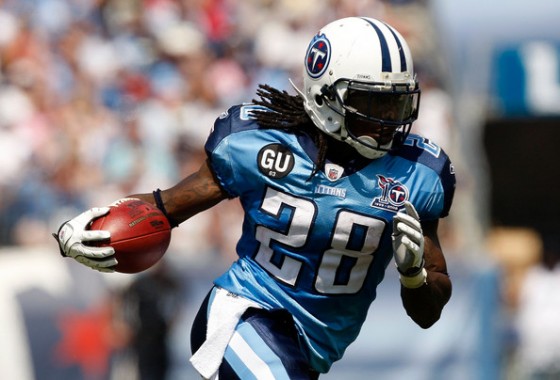 3. RB Chris Johnson (Titans) – It’s impossible to follow up a 2000 yard season. Johnson was solid in 2010, but nowhere near as spectacular as his record-setting ’09. He was held under 50 yards three times and his yards per catch dipped from 10.1 to 5.6. As expected, he saw a glut of eight and nine man fronts which caused him to bob and weave way too much. Who quarterbacks the Titans in 2011? If Jeff Fisher stays, VY is gone. Kerry Collins should be sizing up a Jazzy Chair. Kenny Britt has the skills to dominate secondaries, but he’ll need someone competent under center. Hmm… Donovan McNabb? Never mind, I said competent. At any rate, I still worry about Johnson’s consistency. Home run hitters are known to strike out a lot. Nevertheless, big play guys win fantasy titles, and there is no bigger big play guy than CJ2K.

4. RB Maurice Jones-Drew (Jaguars) – The decline in touchdowns from 16 to seven is a concern. However, the best hyphenated name in the game is the Jaguars offense. Rashad Jennings might steal a few more carries in 2011, but he doesn’t pose a significant threat. MJD just had his knee scoped, which bears watching in the offseason, but he’s 26 and has only toted 300-plus carries once in five seasons. I’m not crazy about David Garrard and the Jags might not be either. Although, the emergence of Mike Sims-Walker, Mike Thomas and Marcedes Lewis gives reason to feel optimistic about the passing game.

5. QB Mike Vick (Eagles) – To be clear, I’m assuming he stays in Philly. Normally, I would never endorse a quarterback this high, or in the opening round at all. I’ve been burned before and there’s always value in the later rounds or on the waiver wire, e.g. Vick in 2010. But Vick isn’t just any quarterback in the realm of fantasy football. In eleven full games, he set career highs in touchdown passes (21), yards passing (3018) and rushing touchdowns (9). If he plays a full 16-game schedule, the stats could be off the charts. He has a terrific trio of wide receivers, a talented dual-threat running back and creative offensive coaches. What’s not to like? Injuries. Cracked rib cartilage and a quad bruise caused Vick to miss all or parts of five games. There’s also the chance he regresses back to Vick 1.0, which he kinda sorta did at the end of this season. Less passing and more running is not a recipe for success. Here’s the Vick fantasy owners love to love:

6. RB Jamaal Charles (Chiefs) – Some might think this is a bit high to select Charles. After all, he only tallied eight scores in ’10. Fair point. But the only thing preventing him from being a Top Three pick is the presence of Thomas Jones and head coach Todd Haley’s stupidity. Both are burdens, but Haley will discover winning with a first-place schedule in 2011 won’t be easy. To help that cause, Charles will touch the ball more. C’mon, the guy averaged 6.4 yards per carry. He’s on the cusp of blowing up. Think Brian Westbrook circa 2006-07. Upon further review, he should go Top Three.

7. RB Rashard Mendenhall (Steelers) – He’s not flashy, but I’ll take a 23-year-old back capable of double-digit scores over a stud quarterback or wide receiver every time. The Steelers have some promising young wideouts in Mike Wallace and Emmanuel Sanders. Does this mean they will suddenly become a pass-happy team? Nah, I’m not buying it. Mendenhall will get gobs of carries and the majority of goal line looks.

8. RB Michael Turner (Falcons) – Why so low? He’ll be 29 next month and just logged 300-plus carries for the second time in three years. He’s also a 240-pound power back. I like the touchdowns, but he has too many red flags to take any higher. 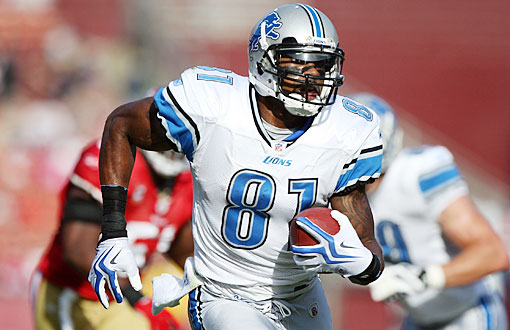 9. WR Calvin Johnson (Lions) – Full disclosure: I’m a little gay for Megatron because he’s helped me win two fantasy titles. He tallied 77 catches and 12 touchdowns with Shaun Hill and Drew Stanton throwing balls to him. If Matthew Stafford welds iron plates to his shoulders and plays a full season, look out. Roddy White and Andre Johnson are the safer picks here, but the Lions have the tools to be a Top Five offense in ’11. I envision 1400+ yards and 15 scores for Calvin.

10. RB Ray Rice (Ravens) – Willis McGahee needs to die or at the very least go elsewhere. He wasn’t the pest in ’10 that he as in ’09, but he still stole six scores that could’ve gone to Rice. I’m not sure what to make of the Ravens offense. Joe Flacco is good, not great. Their receivers are slow, not fast. If they remember Rice is their best weapon, he could put up career numbers. I’m somewhat leery that will happen.

11. WR Roddy White (Falcons) – 115 catches, 10 scores. White entered into elite company in 2010. Matt Ryan figured out #84 is almost always open and just kept feeding him the ball. That’s the kind of receiver I want on my fake team. An added bonus, he never gets hurt; only two starts missed in the last four years.

12. RB Steven Jackson (Rams) – Mr. Consistency. Six straight 1000 yard seasons. At least 40 receptions in each of the last three. Too bad he doesn’t find the end zone enough. Only 24 scores since 2007. I don’t love him at #12, but I like the direction the Rams are heading with Sam Bradford. 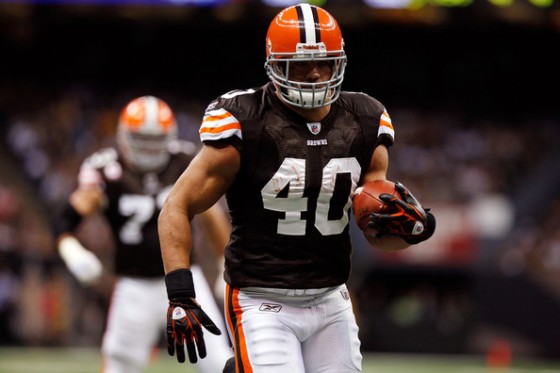 RB Peyton Hillis (Browns) – The big man can run and catch and score. Only problem is he disappeared in December due to being overworked. Browns need more offensive pieces to lessen his load.

RB Darren McFadden (Raiders) – Extremely talented, but has durability issues. I need to see him do it two years in a row before I make him a first-rounder.

WR Andre Johnson (Texans) – Has yet to reach double-digit touchdowns in eight seasons.

QB Aaron Rodgers (Packers) – Again, I don’t draft signal callers until later. That being said, Rodgers is worth a high pick in most scoring formats.

Enjoy the offseason. And cross your fingers for NFL football in 2011.