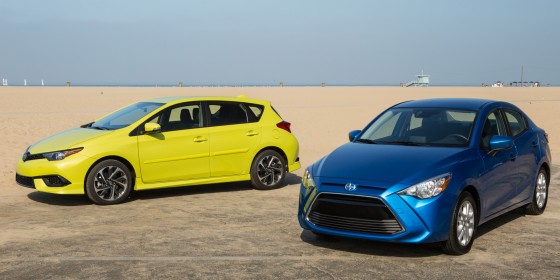 Scion made its début in 2002, focused on selling vehicles to Gen-Y customers with unique designs, viral marketing, “pure pricing” and mono-spec trim levels. Toyota’s descendant achieved some level of success and cult status, but since peaking in 2006, sales have steadily declined. To get things moving back in the right direction, Scion is shaking up their lineup substantially by introducing two new models, the iA and iM, to take the place of the xB, xD, and iQ. Maybe the alphabet soup is part of the problem, or we’re just too old to understand it.

Recently we were invited to Santa Monica, California to experience the future of Scion first hand while driving the iA and iM on the fabulous canyon roads of Malibu. The 2016 Scion iA and iM were unveiled together at the New York Auto Show, and will be advertised together when they hit showrooms in September. So we decided to cover them together in a single review, however they’re unmistakably different cars with completely different origin stories. 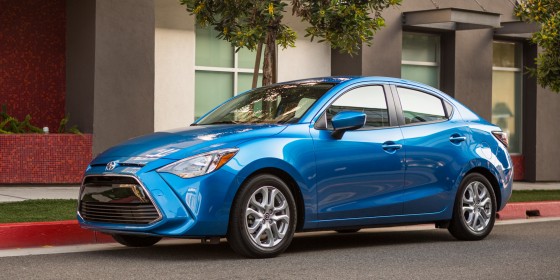 The 2016 Scion iA is Scion’s first 4-door sedan and is based on the Mazda 2, which isn’t sold in the United States. If you were to compare images very closely, you’d realize that the iA closely resembles the Mazda 2 on the exterior, with the very noticeable distinction of the front styling and badging. This isn’t something that the normal Scion buyer is going to realize, and ultimately it doesn’t really matter very much if you like the car, however it’s definitely much closer to a Mazda than it is to a Toyota.

The iA is a relatively sharp-looking sedan, and actually quite stylish for its segment. It’s offered in a few fun colors (Stealth Black, Abyss, Graphite, Pulse, Sapphire, Sterling and Frost), but we can’t help but think it’s decidedly un-Scion like. Perhaps that’s precisely the point, as we mentioned sales have been slumping, so a shift in strategy is certainly in order. While we appreciate the fact that Scion always strived to be different, at the end of the day they need to sell cars, and this more practical model is likely to help. 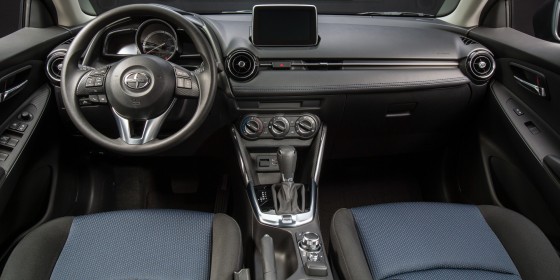 The interior is nearly a carbon copy of the Mazda 2, which is probably why it wasn’t our favorite and was easily outclassed by the iM. We particularly disliked the tacked-on screen and the lack of a center armrest. That being said, there is a compelling amount of content for the price point. The iA is mono-spec, which means they all come standard with a seven-inch display with Bluetooth, backup camera, and push button start. Other features you may take for granted like cruise control and power windows, locks, and exterior mirrors are extra-cost options with some of iA’s competitors. 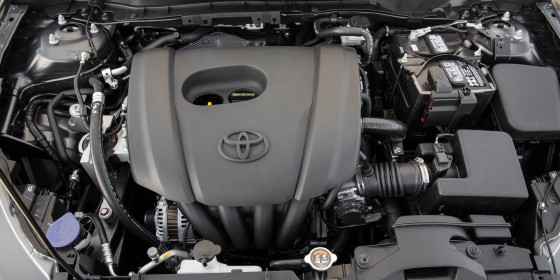 The iA features a quick-revving, high-compression 1.5-liter engine with 106 horsepower; choice of 6-speed manual or 6-speed automatic transmissions; 16-inch alloy wheels; and is rated by the EPA an estimated 37 combined MPG for the automatic version and 35 combined MPG for the manual. The drive performance is where the partnership with Mazda really pays dividends for Scion, as the iA inherits Mazda’s well-known driving dynamics. It’s fun to drive with capable power and responsive steering. 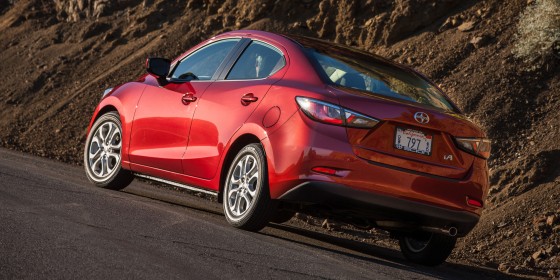 The 2016 Scion iA starts at $15,700 for the manual, and is offered at $16,800 for the automatic. The only other choices are color, and a dealer installable navigation system. The price point is aggressive, and despite the fact that we wouldn’t buy one, that wouldn’t stop us from recommending it to someone who is in the market for a low-priced sedan. It’s an interesting strategic departure for Scion and could be a surprise hit with the proper marketing push. 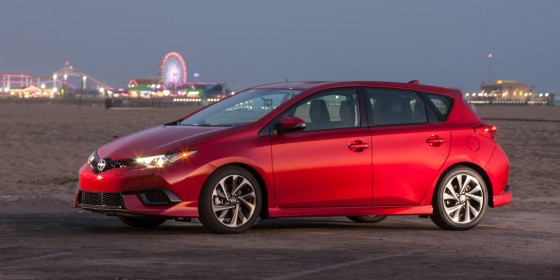 The 2016 Scion iM is a sporty 5-door “fun-hatch” that fills the void left by the outgoing xB and xD in Scion’s lineup. While the iA is re-badged Mazda 2, the iM is actually a re-badged Toyota Auris, which is only available by that name in Europe. It was never offered before in the United States because Toyota had the now discontinued Matrix, but has now made its way to America with Scion badging and style. Once again, most customers don’t know or care how the sausage is made and we agree this model is a good fit for the Scion lineup.

We’re not completely sold on the front end styling, and think it would actually look really sharp with the grille from the iA, however those 17″ wheels are pure sex. We’re also fond of the LED tail lights and two of the color choices; Spring Green Metallic and Electric Storm Blue. The 3/4 quarter rear view that we show at the bottom of this review is easily the iM’s best side. 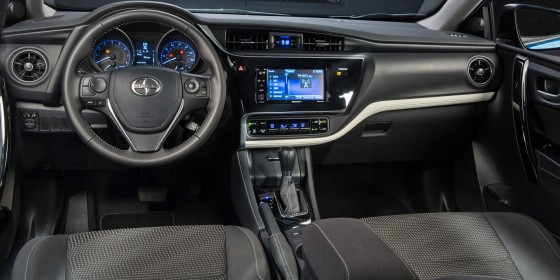 We drove the iM after the iA, and the interior was a pleasant surprise and upgrade for us. High quality materials abound throughout the Scion iM cabin, where the layered dashboard design combines sports car-inspired instrument panel styling with easy to reach, easy-to-use controls. The iM comes with a 7-inch Pioneer Display Audio unit with Bluetooth, HD Radio, and 6-speaker sound. While the iM has a higher price-point than the iA you get plenty of additional content for the money with dual-zone automatic A/C control, 4.2-inch color TFT multi-information display, color-keyed heated power-folding exterior mirrors, and auto on/off headlamps. The interior is spacious and there is even a center armrest, albeit covered frustratingly in fabric. 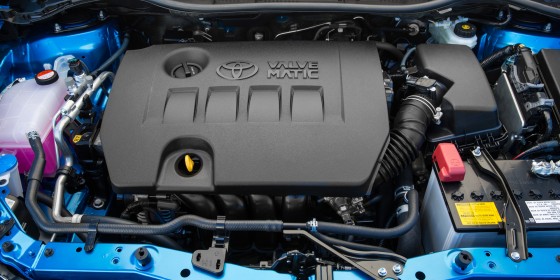 The Scion iM comes with a 137 horsepower 1.8-liter 4-cylinder engine that uses Valvematic continuously variable valve timing (lift and phasing) technology to offer a broad torque curve. The optional automatic features an intelligent Continuously Variable Transmission that’s been sport-tuned and gets 32 combined MPG. The iM felt a bit under powered for its weight when driving through the canyons of Malibu and we didn’t really get to test it at highway speeds. With fat tires and sophisticated chassis, the iM offers a tight road feel that actually gave us a bit of motion sickness later in the day due to twisty rough roads and spirited driving. 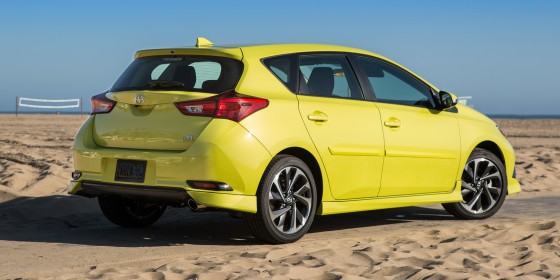 The 2016 Scion iM starts at $18,460 for the manual, and is offered at $19,200 for the CVT automatic. As with the iA, the only other choices are color, and a dealer installable navigation system. While the price is higher than the iA, it’s easy to see where the added money is going, and it’s a compelling package for under twenty grand. The iM is certainly more Scion-like than the iA, however it still could easily be mistaken for a Toyota. Either way it’s a well equipped fun little car that is sure to attract the attention of Scion fans. 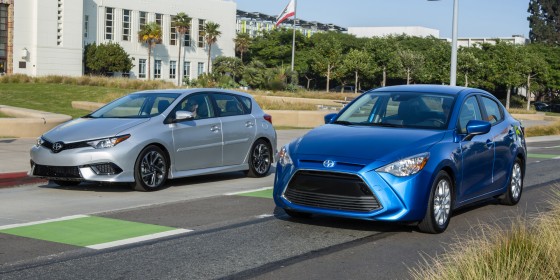 Scion has certainly faced its challenges in recent years, and the new iA and iM models mark a noticeable shift for the company. The theory behind the brand is that eventually their customer base gets older (and moves up to Toyota or Lexus), so in order to remain viable, they must keep producing vehicles that appeal to the next generation of younger buyers. Only time will tell if these new cars will bring in new buyers to keep the brand profitable, or if Scion will get folded back into its parent like Geo did back in the ’90s.

All Scion vehicles come with a three-year/36,000-mile limited warranty and five-year/60,000-mile powertrain warranty. They also come with Scion Service Boost, a complimentary plan covering normal factory-scheduled maintenance for two years or 25,000 miles, whichever comes first, and two years of 24-hour roadside assistance. Scion also offers a no-hassle pricing system that they call Scion Pure Price. The price you see in the dealership, on the dealership’s website, or other dealer advertising locations is the price you pay with no need for negotiation.