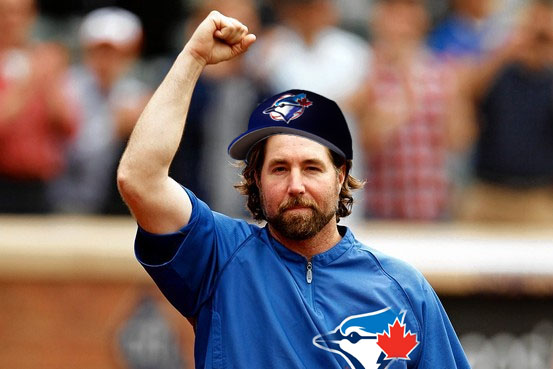 When politicians and economist mention America’s trade deficit with foreign powers the concern usually centers on China, whose growing economy is generating ever larger deficits (3.7% of GDP in 2011). The focus on China overlooks America’s biggest trade partner, Canada, who also sends far more to the United States then it brings in (a whopping 4.8% of GDP in 2011). This trade imbalance has helped fuel the growth of the oil and lumber industry in Canada, as well as insulating their economy from some of the damage of the global economic downturn.

The U.S. has taken its first step toward evening that imbalance today, thanks to a baseball trade. The Mets dealth one of the nation’s rarest resources, a competent knuckleballer, to the Toronto Blue Jays in exchange for a pair of highly rated prospects. The trade, made possible in part by the financial wizardry of Bernie Madoff, sees 2012 NL Cy Young winner R.A. Dickey going north of the border to join a Toronto team that has spent the offseason importing talent from the United States, including CF Emilio Bonifacio, C John Buck, LHP Mark Buehrle, RHP Josh Johnson and SS Jose Reyes, who were acquired from Miami in November. The influx of talent reverses a decades long trend of America exploiting Canadian-produced resources for its own benefit.