Five Reasons Why Bert & Ernie Should Come Out of the Closet 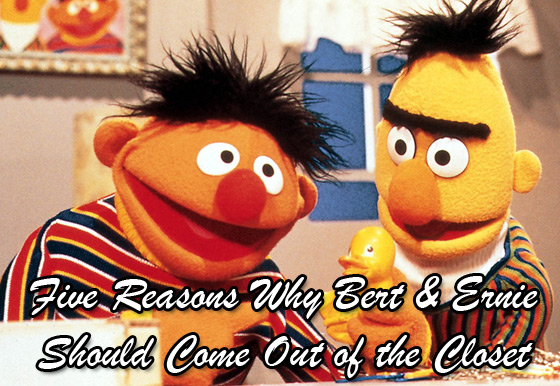 A recent tweet by Bert from Sesame Street led to speculation that he’ll soon be coming out of the closet. While rumors of Bert and Ernie’s homosexuality have been around since Jim Henson and Frank Oz stuck their hands up their backsides (This is Gunaxin, we make stupid jokes like that), it’s time to list good reasons why now is the time for them to finally admit the extent of their relationship.

1. To teach children about gay people

Too often, children first learn about homosexuality in a negative context from peers. The first time I heard about it was from older kids who were calling each other “faggot.” As a preschooler, Bert and Ernie were my heroes, and if I had known they were gay with the child-friendly definition of ‘two men who live together as a couple’ I would’ve started out with a much more positive view of homosexuality than what I learned on the playground. The only drawback is that homophobic or closed-minded parents may keep their children from watching the show under this circumstance, thus potentially harming their child’s cognitive development in more ways than one.

2. To teach kids that gay people can be polar opposites

Another one of the early beliefs about gay people is that they’re “flamers.” Though I knew better, it wasn’t until I was 18 and working in the warehouse of an interior design company that I really got a firsthand look at the diversity of personalities in the homosexual community (ranging from the guy you’d never suspect to the guy who dressed as Dorothy on Halloween – seriously). Young children recognize Bert and Ernie are very different from one another, and their opposite personalities at the very best will keep gay folks from being stereotyped.

3. To give a boost of confidence to young gay kids

I don’t know at what point kids start to realize they’re gay, but if they’re actually taught what it is by understanding Muppets instead of left to learn about it on the playground in a negative context, I can only presume it would be easier on them.

4. There’s been an HIV positive Muppet already, so why not a gay one?

Sesame Street in South Africa unveiled an HIV positive Muppet years ago due to the HIV epidemic in that part of the world. South Africa doesn’t have a history of open-mindedness, yet teaching kids about HIV via a Muppet was groundbreaking. Imagine if Sesame Street had just admitted in the first place that Bert and Ernie were gay (assuming PBS would’ve been open to it back then). With gay bullying and gay suicides such hot issues lately, admitting these Muppets are gay can help fight these issues. People who disagree are either homophobic, closed-minded or believe it’s up to the parents to explain. In all cases, the parents are likely causing more harm than good to the child’s development than with just this one issue.

5. To end the speculation

To me, it’s kind of annoying when someone who is obviously gay doesn’t officially come out and admit it – then admits it and receives much fanfare. Ellen DeGeneres’s big moment was the biggest “no s%$#, Sherlock” moment of the 20th century. Please read: These days, it’s only brave for a celebrity to come out of the closet when there’s NO MAJOR SPECULATION that he or she is gay. Bert and Ernie coming out won’t exactly shock people, but the fact that Sesame Street can teach children about homosexuality and raise them to be accepting is a step that needs to be taken if we expect to make bigger strides toward decreasing stigmas and prejudice in the coming years.

Other than homophobic and closed-minded arguments, the only one I’ve heard in response to this is that Bert and Ernie are puppets and can’t be gay, and there’s nothing wrong with leaving it as a friendship. While that’s not wrong, Sesame Street would be missing a huge opportunity.

By the way, Gunaxin got a photo of Bert and Ernie at the Rally to Restore Sanity on the National Mall in Washington D.C. 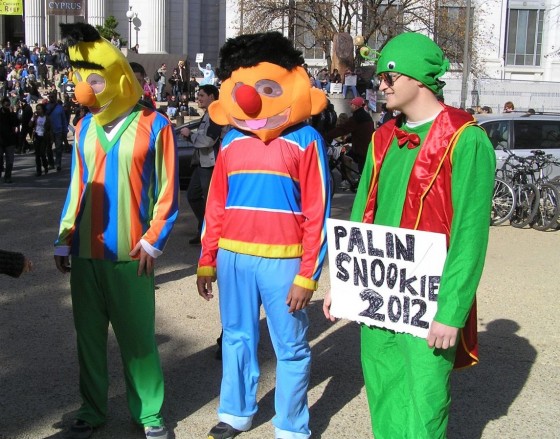