Sports > Football > Could Jake Locker Play in the MLB?

Could Jake Locker Play in the MLB? 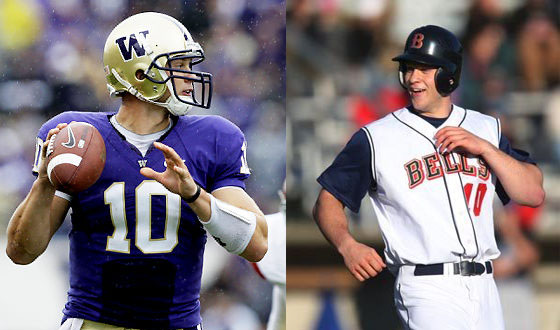 Will the real Jake Locker please stand up?

The vast majority of attention surrounding Jake Locker concerns where the young QB will find his name drafted in this year’s NFL Draft. Currently, he finds himself ranked amongst the top-5 players at his position, but perhaps would have been the number one overall pick had he entered the draft a year earlier.

But what if the NFL really does close their doors for a season?

Unless you’ve followed Locker’s career closely, you might not be aware that the Los Angeles Angels drafted Locker in the 10th round of the 2009 Draft, offering him a $250,000 signing bonus. The Angels currently hold his rights until August of 2015, as reported by ESPN Los Angeles.

So far, Locker has done everything required of him to live up to the obligations of his contract. He has appeared at the club’s training facility in Arizona on a semi-regular basis, keeping his skills sharp.

What will the future hold for Jake Locker – baseball or football? He has done a very nice job keeping as many opportunities as he can open for himself, which comes as a welcome sign after many feel he made a mistake by not entering the NFL Draft prior to his senior year.

Ultimately, assuming the NFL does stay open for business, we imagine Locker will stick with football. However, if they do close up shop or in the scenario Locker sees himself tumble down the board on draft day, well … that would sure make for an interesting story if he switched to baseball.