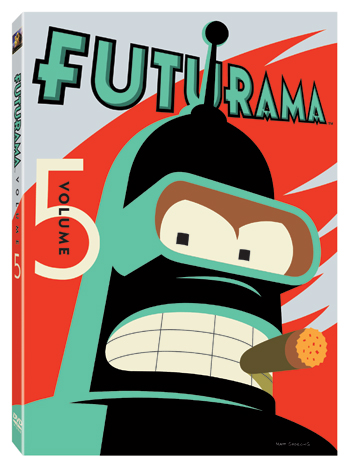 Futurama: Volume 5 will be available on DVD and Blu-ray beginning December 21, 2010, just in time for the holidays!

The Simpsons genius, Matt Groening, placed a large order of these “shiny discs” featuring the animated series for your enjoyment. Join Fry, Bender, Leela and the rest of the gang for 13 hilarious new episodes that tackle some of the most controversial subjects in the galaxy, including evolution, mind exchange, feline intelligence and even robosexual marriage. Bender believes it can happen!

My Masters of None colleagues (Mike and Jay) and I had a chance to chat with Billy West who stars in Futurama. Check out the interview here!

Both the DVD and Blu-ray sets have many great features such as deleted and extended scenes; audio commentaries; featurettes including “Bend it Like Bender”, “Previously On…”, “Fry’s Crudely-Drawn Comic Book – The Crudely Animated Edition,” “Behind the Fungus: Makin’ a Hit Song,” and more. Plus, special guest appearances by Coolio, Chris Elliott, Craig Ferguson, Al Gore, Matt Groening and George Takei.

Enter to win your very own copy of Futurama: Volume 5 on DVD by following us on Twitter or purchase a copy at Amazon.com for a retail price of $39.98  and the 2-disc Blu-ray version is $49.99.