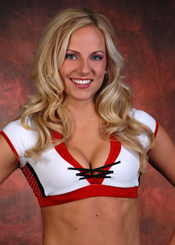 Founded in 1898, originally called the Morgan Athletic Club, the Arizona Cardinals are the oldest existing American Football club in the United States. For a team that has such a long history in the sport, it’s difficult to believe they have won only five playoff games since winning the NFL Championship Game in 1947, let alone winning another championship. I’ll admit I’m not a fan of the Cardinals, simply because I’m not from Chicago, St. Louis, or Phoenix, but for a team that has waited so long to come this far, they truly deserve to win the Super Bowl this year.

Despite having a poor record in the NFL, the Cardinals cheerleaders are nowhere near as bad. Their squad was established in 1977, and for more than three decades, they have produced Danielle Demski, a television presenter and a beauty queen from Arizona, and Phyllis Smith, the fat actress who plays Phyllis Vance in The Office. Before you’ve recovered from falling over your chair, let me tell you that she was once a skinny hottie in her younger years, but we’re not going to bother to prove that. Instead of talking about the former Cardinals cheerleaders, let focus on the ones in the present time, shall we? Hopefully our effort in putting together this seven-page gallery will get you fans warmed up for the Super Bowl weekend. Good Luck Cardinals.