The Lingerie Football League kicks off its season this Friday, so we thought we would give you a little preview.The concept originated in 2004 with a Super Bowl halftime alternative special called the Lingerie Bowl. In the past I believe the Bowl was a bit of a joke, featuring models who really couldn’t play football. However this season all that has changed. While the women are certainly beautiful, and they still wear lingerie, now they can play too. This fall, ten LFL inaugural season teams will compete in a twenty week season with games being played at major arenas and stadiums. The weekly broadcast will be shot in high-definition and will be available via cable television as well as online streaming. 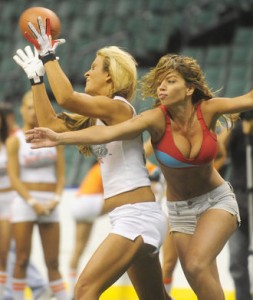 Play style is full-contact and substantially similar to indoor football. Uniforms consist of helmets, shoulder pads, elbow pads, knee pads, sports bras, and shorts. There are no field goals and no punts. There is a kickoff to start the game and second half. A team must attempt to get a first down on every fourth down. After a touchdown, a team can attempt a one-point conversion from the two yard line, or a two-point conversion from the five-yard line.

There are seven women on each side of the 50-yard field, the same as the Continental Indoor Football League, but one less than the eight players usually found in arena football or other indoor leagues. Teams consist of 18 players, only 12 of whom are active on game day. 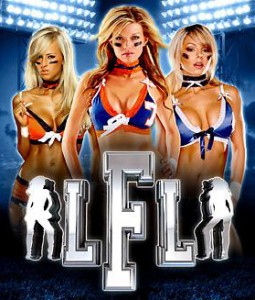 This means at least 3 or 4 players play both offense and defense. The standard offensive formation features 1 quarterback, 2 running backs, 1 center, and 3 wide receivers. The standard defensive formation features 2 defensive linewomen, 2 linebackers, 2 cornerbacks, and 1 safety. The field is 50-yard between end zones, 30 yards wide, and the end zones are 8 yards deep, roughly the same as other indoor leagues. A game consists of two 15-minute halves, separated by a 12-minute halftime. In the event of a tie, an 8-minute sudden-death overtime is played.

So it sounds like it’s game on. I’ve had the pleasure of meeting many of these ladies on Twitter, and I can tell you they definitely work hard. They have been practicing for months now, and are totally juiced up for the season. The season begins with the Chicago Bliss and the Miami Caliente. Conveniently we have interviewed and featured both of their captains : Danielle Moinet from the Bliss, and Reese Zoppelt from the Caliente. 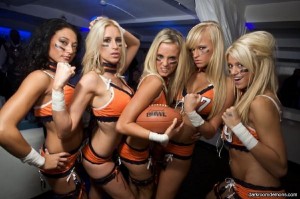 Everything sounds fabulous right? Well, I do have a few criticisms of the new league. They are running their season during regular football season. So even though their Friday night schedule should avoid major conflicts with the NFL and College, it will directly compete with High School Football. Apparently the desire to run it’s championship game in conjunction with the Super Bowl was enough to convince the LFL to run up against football competition all season long. I can’t help but think that running the season starting in February would give football fans something to watch during the off-season, but I guess that plan has failed for other leagues. None of those leagues had women playing football in lingerie though.

The really experimental thing about this league is combining actual athletic competition with hotties in their underwear. Women’s leagues have been around for awhile, but no self respecting man is really going to a WNBA game, unless he is taking his daughter. Obviously men enjoy good looking girls in some sexy lingerie, and will gladly plunk down money at the strip club or even Hooters to see it. The Lingerie Football League is neither strip club, nor serious football league (in the same vein as leagues mentioned above), but it falls somewhere in between. Will it be able to attract enough of an audience while many men would rather be at Lambeau Field or the Hustler Club? I guess that’s the gamble. 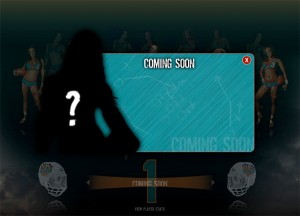 The third thing that concerns me about this league is the website. They have a pretty fabulous site, with customized pages for each team. However the rosters and photos are out of date. Many teams have incomplete rosters, and they picture players on the wrong teams. For men who are used to playing fantasy football, memorizing the rosters of NFL teams, and having all stats and information squared away for them, this may be an annoying oversight. If the league really wants to be taken seriously, it needs to get its sites up to date, so that fans can get an idea of who they are cheering for.

Maybe I’m taking this entire thing too seriously, but I have a hard time figuring out if that’s what the league wants. In the end it should be great entertainment, and that’s what all sports really are anyways. Somehow I don’t think the instant replay will be used to determine a crucial call in the game, it seems much more likely the the ultra slow motion high definition replay will be used for other reasons.