Media > Movies > Love & Other Drugs on Blu-ray and DVD

Love & Other Drugs on Blu-ray and DVD 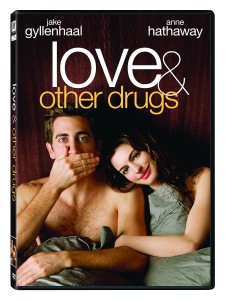 Coming to Blu-ray and DVD on March 1st you can get Love & Other Drugs. This film has a great cast, especially co-stars Anne Hathaway and Jack Gyllenhaal. It was directed and produced by Edward Zwick and based on the best-selling book Hard Sell: The Evolution of a Viagra Salesman by Jamie Reidy.

The film sets up with smooth-talking playboy Jamie Randall (Gyllenhaal), who is on a fast track to the top of the pharmaceutical sales industry. He promotes Viagra by day and charms the ladies by night. However, Jamie is taken aback when he meets Maggie Murdock (Hathaway), a sexy free spirit who doesn’t allow her treatment for Parkinson’s get in the way of living her life.  Throughout the film Jamie and Maggie juggle their respective medications and they are forced to reassess their budding romance.

The film also stars Hank Azaria, who we all know as the voice of Moe from The Simpsons, which is always a plus. I dug the film; it’s a story you can watch with your girl. Plus, you get to look at Anne Hathaway.  You can purchase it at the Fox DVD store or Amazon on March 1st. If you follow us on Twitter you can win a DVD copy of the film. Check out the trailer below and have fun with the addictive word search game below the trailer.