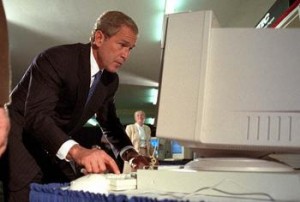 It probably will come as no surprise to most that the White House, which was occupied by George Bush and his staff for the past 8 years, is like stepping into a time machine. The Washington Post has a great article describing some of the problems. I’ll pull out some of my favorite excerpts, but definitely check it out for the full detail…

Two years after launching the most technologically savvy presidential campaign in history, Obama officials ran smack into the constraints of the federal bureaucracy yesterday, encountering a jumble of disconnected phone lines, old computer software, and security regulations forbidding outside e-mail accounts. What does that mean in 21st-century terms? No Facebook to communicate with supporters. No outside e-mail log-ins. No instant messaging. Hard adjustments for a staff that helped sweep Obama to power through, among other things, relentless online social networking.

“It is kind of like going from an Xbox to an Atari,” Obama spokesman Bill Burton said of his new digs.

The team members, accustomed to working on Macintoshes, found computers outfitted with six-year-old versions of Microsoft software. Laptops were scarce, assigned to only a few people in the West Wing.

That is a great picture to think about as the head of our Government. While many will blame security regulations for the state of the technology in the White House, if technology had been a priority for the previous administration, these problems could have been solved. I guess that is what you can expect, old outdated equipment to go along with the ideas.