Ah yes, the Holiday gift exchange, there are many ways to do it. Some offices do the dreaded Secret Santa, but more sophisticated offices take their Secret Santa and turn it into Yankee Swap :

This holiday season, our friends at Crown Royal are taking the spirit of Yankee Swap and gift exchange a bit further… by giving out all of the presents! They’ve recruited Gunaxin, along with tons of other great sites to participate in a virtual gift exchange, with real stuff. Real. Good. Stuff.

They’re calling it Pass the Crown, and you can follow the craziness on Twitter by watching the hashtag #PasstheCrown. On top of that, every time that hashtag is used, they will send a Crown Royal gift bag to a U.S. solider overseas through the Crown Royal Heroes Project.

During the holiday season, every site playing the game will receive an awesome gift from Crown Royal on a pre-designated day at 9am. The gift will be virtually wrapped in one of Crown Royal’s iconic purple bags embroidered with a hint as to what’s inside. Upon receipt, we each have until 4pm that day to decide if we want to open the bag to find out what’s inside, or steal a gift already opened by a person before us – forcing them to take whatever was in our bag!

Yesterday was our turn, and with 16 gifts opened before us, we had an amazing list of items to choose from including the following that caught our attention :

You may remember that last year we played the same game, and ended up stealing (and keeping) the bottle of Crown XR and hosted an awesome Happy Hour. So we decided we’d forgo the desire to acquire cool gadgets, and once again go for the steal of a bottle of Crown so we could host a happy hour. However this year we opted to snag a bottle of Crown Royal Black from Everyday Drinkers, and let our boys over at The Roosevelts hold on to their XR.

Before we decided to steal though, we were presented with an embroidered Crown Royal Bag as a clue, with the words “Know When to Dive In.” We never really considered opening it, since we had our heart set on another bottle of Crown and a Happy Hour, but check out what was inside : 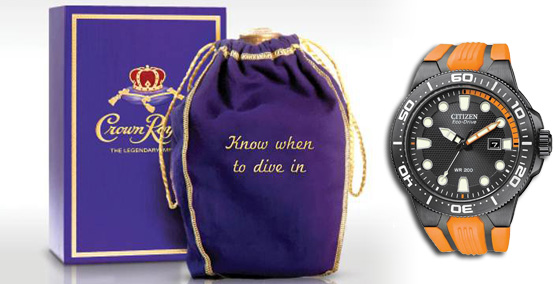 That’s an amazing Citizen Eco-Dive Scuba Fin Sports Watch which is now proudly in the column of Everyday Drinkers. If you like the embroidery work on that Crown Royal bag, its available to adults (21+) on www.CrownRoyal.com for $9.95 and features a max of 40 characters – perfect for the person who says it short and sweet. Or, you can also personalize a Crown Royal bottle label – for free.