Information: The Olde Peninsula Brewpub has become a well-received watering hole here in Downtown Kalamazoo. Though they’re not quite as well known for their relatively diverse food menu, what they lack in foodie favorites they more than make up for with their site-brewed beers. They have a specific beer, all their own, falling into just about every style including IPA’s, Ales, Stouts, and Seasonals. Though they don’t sell their beer locally -as in ‘in stores’- you can purchase everything from growlers to half-barrels on site. 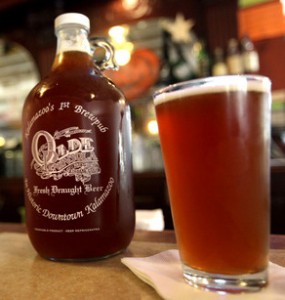 If it’s one main thing The Olde Peninsula is known for, it’s their site-brewed beer. They’ve been crafting and producing amazing ales, stouts, and IPA’s for the better part of 15 years and they really know what they’re doing. In fact, I remember hitting their establishment on their opening weekend back in 1997 and I knew right away that their popularity was completely hinged on the fact that they brewed right at home. Only a small handful of local breweries actually threw their hat into the pub ring, and even fewer survived past a couple of years. The Olde Peninsula would certainly prove the rule wrong.

We here in Kalamazoo hang our seasonal excitement on a few regularly released beers: Bell’s Oberon in March, and definitely The Olde Peninsula’s Pumpkin Ale in September. The Fall is certainly my favorite of the two, as I’m far more partial to darker, heartier brews, so it should come as no surprise that I was geared up for my first taste of this September’s Pumpkin Ale. And it didn’t disappoint. It is barely opaque with its deep orange and slightly amber hue. It has a rich, creamy head that hangs on for the ride losing only small portions of itself to the lacing it creates as you drink it down. The flavor is unmistakably pumpkin: slightly bitter, fully reminiscent of Thanksgiving, and so intensely flavorful and crisp that the simple fact that the mug didn’t have a few fallen leaves around it surprised me. It has a cloying body and slightly spiced undertone that sticks with you between sips, reminding you fully and completely that you are enjoying a beer with pumpkins in it. Just amazing.

Knowing me, as I really do, I was not going to be content with either the prospect of one beer, or one beer of one type. So I of course had to try the next on the Fall menu called Jack O’ Lantern. Basically, the amazing folks at Olde Pen take their amazing Pumpkin Ale and combine it -somehow, but not like a Black and Tan- with their Imperial Stout! You can’t be serious! This arrived as a deep shade of chocolate brown with the requisite head you’d imagine from combing both of these brews. Oh but the flavor was simply astounding. The combination of the rich, molasses of the Imperial with the slightly bitter Ale was breathtaking. It was almost as though these two brews deserved one another: sweet yet dry, hearty and crisp, slightly heavy and at the same time not over-filling. Perfect. Highly recommended.

Ah, but the would-be trifecta wouldn’t end there. Oh no. I managed to save the best -in my humble opinion- for last. Also the one with the coolest name! And that was the Stout Chocula. And seriously, the name absolutely says it all: full nose of what could easily have been chocolate cereal on which the name was based, and an underlying melody of dark cherries and bitter hops. I was in my own little slice of Heaven… beer heaven. Oh this stuff was thick, full-bodied, and as deep black as you please. My wife joked that it looked like a giant mug of coffee. She wasn’t too far from the truth since somewhere deep within the beer’s recesses slept a flavor so reminiscent of espresso that it was almost ironic. Almost. This was a beer that took some time. Time very well spent. This is a beer I could curl up with.

All in all, a night of beer drinking I won’t soon forget. Not to mention the fact that it was all on my 11-year wedding anniversary. Good stuff. And here’s hoping somehow those of you reading this from all over the world can find your way to The Olde Peninsula Brewpub in Kalamazoo, Michigan.