We were recently asked to review Nike’s new driver, and compare it to the Taylormade. I have to admit, I would probably never buy a club like this, because my golf game sucks, and I can’t imagine ever buying an expensive club to put with my inconsistent swing. I don’t exactly suck to a Charles Barkley level, but I have been known to lose a few balls. Now that doesn’t mean I don’t appreciate fancy golf stuff. In fact, I think I enjoy shopping for and buying golf stuff more than I actually enjoy playing golf. The idea of getting some new piece of equipment, and having it magically fix my game the next day on the course is appealing to me when I go on a golf trip with buddies.

So getting that out of the way, I was asked to test Nike’s new SQ DYMO STR8-FIT (seriously, what is up with that name?) driver against the Taylormade R9. They call it the 8>9 challenge, essentially trying to prove that their driver is better than Taylormade’s newest offering. To me it appears some shady business is going on with the naming of these clubs. It seems to be similar to what happened back when Internet Explorer was battling Netscape, and Microsoft skipped version numbers to appear that they were ahead in technology. Apparently Taylormade went from the R7 to the R9, while Nike used an 8 in the name of their newest club presumably as a hip way of saying the club hits Straight (STR8). So did Taylormade skip the R8 to infer their club was better than Nike’s? We don’t know enough about the business to say for sure, but we’ll just speculate wildly. 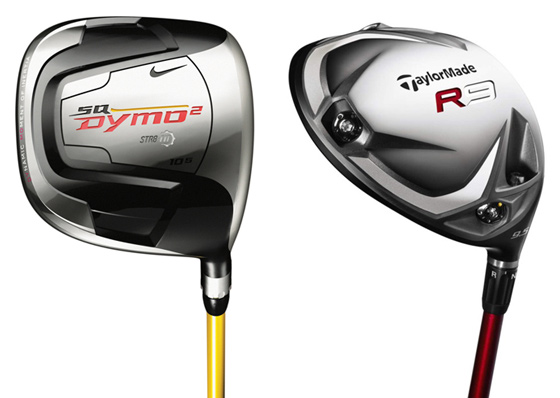 Ok, so as I already stated, I suck at golf, so one of the most important things to me is how this club is going to look in my bag. The Nike overall has more aggressive styling, and a flashy yellow shaft. This aggresiveness extended to the club head covers as well, with Nike providing a more modern look. I would suspect that Tour Pros (other than John Daly) may be a bit embarrassed to put all of that yellow into their bag, Perfect! The R9 is more understated, and conservative. I understand that the Taylormade brand may mean more to golf purists, but to me and my generation, there is nothing cooler than Nike. When it comes to golf clubs, I want my bag to do the talking for me, since my game can’t.

I’ll admit, this is the first time I have ever used one of these fancy swing machines. Essentially you swing your club, hit your ball into a screen, then the computer calculates everything. So I tried both the clubs. The guy running the machine must have known there was zippy chance I was buying one of them, but he played along and let me play with his technology. As I said, my swing is inconsistent, and I surely don’t hit that damn white ball in the right place every time. So to me, the more forgiving club was going to win my affection. One thing I noticed right away is that the Nike club was quite a bit louder than the R9. For intimidation of my friends alone, I think I like a loud club. The Nike SQ DYMO STR8-FIT came out ahead in almost all of my tests, but it was the consistency of the results that caught my attention. I won’t bore you with the numbers, but when I screwed up, the Nike club was much more forgiving of my mistakes than the R9. The distance from center was much lower, and my overall distance stayed longer. To me, it was apparent that this club could help my less than mediocre game, and give me a bit of confidence to work at it. 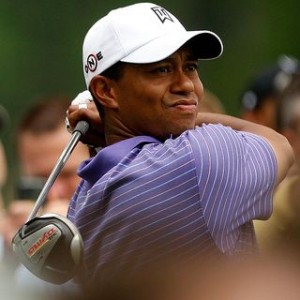 Golf manufacturers know that professionals using their clubs has a huge impact on how many clubs they sell. When you go out and play on a Saturday morning, you want to be using the same club that your hero will be using when you watch on Sunday afternoon. So while it is tough to keep up with exactly which club a golfer is using at the moment, it is well known that Tiger Woods and Anthony Kim are Nike guys. Tiger just won the AT&T National this past weekend using his new STR8. Who uses the Taylormade? Boring old guys like Kenny Perry and Jim Furyk. 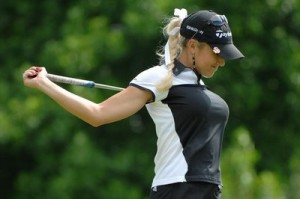 Of course we’re interested in more than just the men’s game here at Gunaxin. So I made sure I asked the Nike rep who on the LPGA tour was using their newest club. The answer provided was a bit obscure to me, Norwegian, Suzann Pettersen. We provided a gallery below so you can make your own judgment. Natalie Gulbis uses a Taylormade.

Both the R9 and the STR8 offer new technology in an adjustable head. While I played with this a bit, I didn’t have the time to figure out how exactly this will benefit my game. I’ll leave that to those that are smarter than me. I will note however that the Nike club has just experienced a price drop, so if you are interested, I guess there is no better time. Here is a video which shows the adjustable nature of the club: