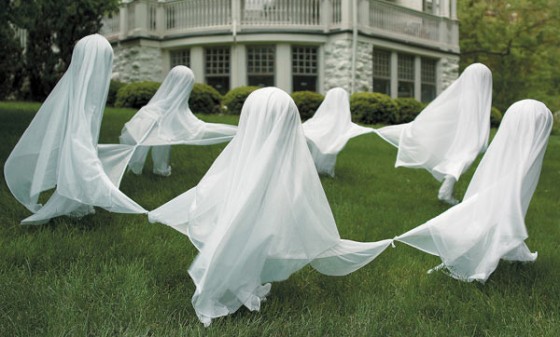 In the spirit of Halloween, we at Gunaxin decided to give you a list of the Ten Best Ghosts of all time. This top ten list is so good, there are eleven ghosts (or maybe we learned to count at a Big 10 school). So we’ll get right to it….

11. Blinky – The red ghost that pursues Pac-Man, he gets the nod over Inky, Pinky, and Clyde because he speeds up after a certain number of dots are eaten. There’s no escaping the accelerated super Blinky, which is sometimes dubbed Cruise Elroy. Plus, who here doesn’t have Pac-Man fever from time to time?

10. McBoo – Alright, maybe this stretches the definition of ghost, but who didn’t get one of these things from McDonald’s as a kid? The question is, did you ever use it? I mean you can’t fit that much candy into these things. And they’re kind of bulky. Still, for nostalgia purposes, I’ll give a spot on my list to McBoo and his plastic container body.

9. King of the Dead – The cursed leader of the Dead Men at Dunharrow, he controls the Army of the Dead from the Lord of the Rings trilogy. Basically an unstoppable and invulnerable force (since they’re already dead), the man has a lot of power at his fingertips. And they even made an action figure of him that glows in the dark. So that’s enough to crack my top 10.

8. Casper – Yes, the friendly Ghost. I always thought he was a bit lame as a kid, but he managed to star in a cartoon series and an eventual live action movie. And you probably know his name. So that all counts for something, right?  And unlike many ghosts, he is quite personable. So that makes him a bit unique. But if you want to make him a little creepier, he appears to be a dead boy and his origins are always a bit hazy. So create your own back story for Casper and run with. A bit of trivia, according to the 1995 Casper film, his full name is Casper McFadden.

7. Nearly Headless Nick – Officially Sir Nicholas de Mimsy-Porpington, but often referred to as Nearly Headless Nick. He hails from the Harry Potter series as the Gryffindor house ghost. In life Nick was sentenced to death by beheading, but the executioner only managed to partially decapitate him after 45 hacks. He makes this list off the goodwill of Harry Potter, his partially severed head, because he took 45 chops to the head, and because he is played by Monty Python alum John Cleese in the films. Monty Python mixed with severed heads and Harry Potter? That’s gold Jerry!

6. Yoda – Everyone loves the backwards talking Jedi Master from the Star Wars franchise. So you can love him again in ghost form. One of the few Star Wars characters that appear on screen in ghost form, he also gets bonus points for being from a “mysterious species.” And yes, his battle from Attack of the Clones is one of the highlights of that movie. Bad ass ghost, this guy is. Hmmmmmm.

5. King Boo – The Boo sport beady eyes, long tongues, vampiric teeth, and nubs for arms. Unless you’ve never played a video game before, you’ll recognize them from the Super Mario World. First appearing in Super Mario Brothers 3, one might argue they helped launch the use of ghosts in video games. The Boo use the Ostrich technique of fighting, being what you can’t see can’t hurt you. If you looked at them, they cover their faces with their arms, cower, and become translucent. But if you look away, these guys would try and sneak up on you, ninja-style. King Boo is simply larger than the average Boo and dons a crown. He first appeared as the final boss in Luigi’s Mansion.

4. Lloyd, the Bartender from the Shining – Hopefully, you’ve seen (or read) the Shining. Starring Jack Nicholson as Jack Torrance, it features an aspiring writer who takes a job as caretaker of the Overlook Hotel during the winter months. The hotel becomes isolated during the winter due to ice and snow. Alone with his family, Nicholson’s character slowly goes insane aided by various ghosts, including Lloyd, played by Joe Turkel. Turkel helps convince Jack to try and kill his family. Due to his calm, yet effective style, Lloyd garners a spot on this Top 10 list. Redrum!

3. Boo Berry – He’s less successful than his friends Count Chocula and Franken Berry. However, he’s more successful than Yummy Mummy or Fruit Brute (did you even know these existed?). So he’s doing all right. Not always easy to find except for the Halloween season, Boo Berry is one of General Mills’ monster themed cereals. Sporting a red bow tie and a red and yellow hat, Boo Berry hocks his blueberry flavored marshmallows and corn cereal bits on people of all ages. And as a bonus, his voice was made to sound like Peter Lorre. That’s a nice touch.

2. Slimer – He’s in Ghostbusters I and II. That’s cool. He was in the cartoon spinoff. That’s pretty cool. And he even got his own flavor of Hi-C, Ecto Cooler. I loved that neon green Ecto Cooler drink as a kid, so here’s to Slimer’s spot at number 2. Fun Fact: a green blob, with two skinny arms, no feet, and several chins, he was never called by any name during the films. In fact the creature’s original moniker was simply The Onionhead Ghost. Slimer has a better ring to it.

1. Space Ghost – So why’s he number one? A 1960s cartoon series that saw a brief revival in the 1980s, Space Ghost, or Tad Eustice Ghostal, re-invented himself as a talk show host in the 1990s in Space Ghost Coast 2 Coast. To top if off, he invited his former arch enemies Zorak and Moltar to work on the show with him. Spanning five decades, he’s provided entertainment both from a comedy and action standpoint. And if you ask nicely, he’ll probably zap you (but not in a gay way).