Sports > Football > Tiki Wants the NFL and His Life Back

Tiki Wants the NFL and His Life Back 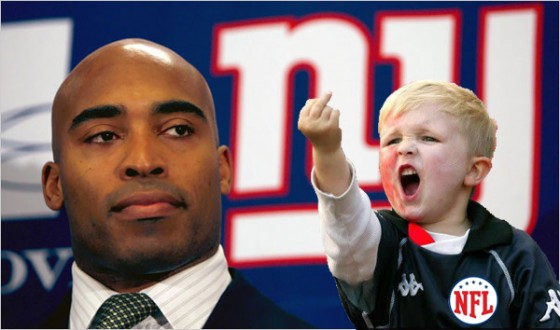 Tiki comes knocking at the NFL's door, again... good luck with that.

Tiki Barber, former running back with the New York Giants, former analyst for NBC’s NFL cover team, former Today Show token, and former all-around-celebrity-in-the-making, has filed paperwork with the league office to end his retirement and offer his services to any NFL team in need of help at his position.

From Jon Wertheim with Sports Illustrated…

Tiki Barber has alerted the NFL that he plans to come out of retirement and play in the 2011 season, sources close to the former New York Giants running back said Tuesday.

The Giants acknowledged on Tuesday that Barber has asked to be taken off the reserve-retirement list and that they will release him once the league allows it. Teams cannot make roster moves during the current extension of the CBA talks.

The 35-year-old back, who turns 36 in April, retired in 2007. He played 10 seasons, all for the Giants, finishing his career as the franchise’s all-time leading rusher.

From there Tiki felt it best to launch into a career of television stardom and counseling the youth of all ages in pointing their futures towards success and triumph.

First, Tiki blessed the masses with wisdom for the cast and young fans of Sesame Street…

As you might have guessed (this is a professional athlete), Tiki was and remains totally full of shit. Wertheim takes off into an abbreviated recount of Barber’s escapades since choosing retirement from the NFL and the pursuit of fame via non-violent mediums… but he fails to meet our needs.

… and for what it’s worth, no one has come forth before or since to deny it as truth.

In fact, more than a few have come forth to collaborate on the tales of assholery.

Unsilent (a.k.a. Jack Kogod… he fucking rocks, if you weren’t aware) covered the headline for Kissing Suzy Kolber and quickly tied Barber’s true motivations to his decision to “un-retire.”

Parks Smith with the blogosphere bullies needed all of two paragraphs to dismiss Tiki as a viable option for NFL employment.

Best of all, former teammate and currently-employed NFL analyst Antonio Pierce shared his thoughts on Tiki, both as a person and as a player…

Tiki Barber, the leader, the person in that locker room? He is not going to do anything for your team… Now if that is the guy you think you are bringing in, you might want to look in another direction… He didn’t do anything to help the Giants in 2006 when he decided to retire in the middle of the season and then months later question our quarterback and our head coach.

From our point of view… we appreciate the first form of entertainment Tiki has put forth since providing his “insights” on Peyton’s brother. He’s been struggling to get his career in showbiz started since leaving the gridiron for the studio and it’s safe to say, by any measure or source of evaluation, he has failed. His latest attempt to tuck tail and get his checkbook back in order has provided us with a full 24 hours of laughs, easily ranking as his best work since 2005.

You can’t take that away from him… and it sure beats another day of doom and gloom.