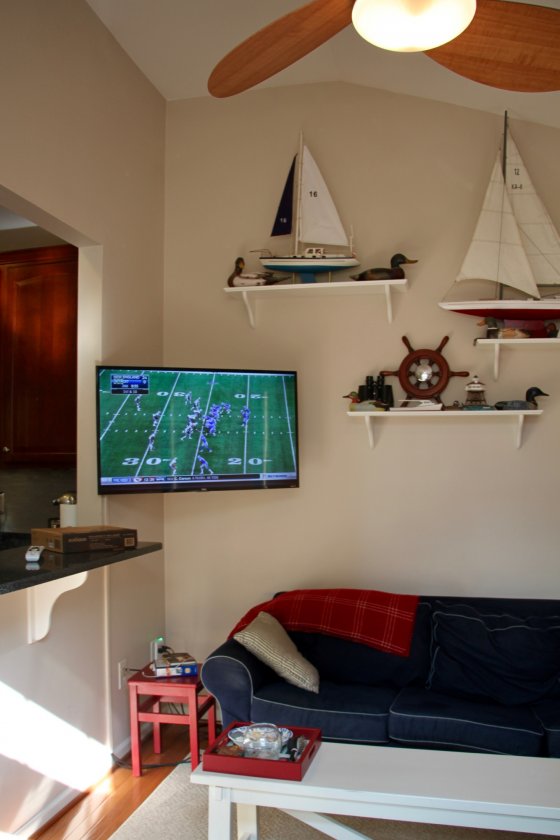 This is a sponsored conversation written by Gunaxin on behalf of ECHOGEAR.
The opinions and text are all ours.

Football season is finally here, and if you’re anything like us, you want to be able to watch the games from nearly every room in the house. We’re not talking about streaming the game on a tiny phone or tablet. We’re men, and we like big flat screens mounted to the wall like artwork, so that we can enjoy our entertainment in style. Here at Gunaxin, as you would expect, our entire home/office is a Man Cave, and it was due for an upgrade. Rather than just placing a new television on a piece of furniture in the corner of the room, we wanted to do it right, and mount it to the wall in such a manner that it could be swung into multiple rooms. 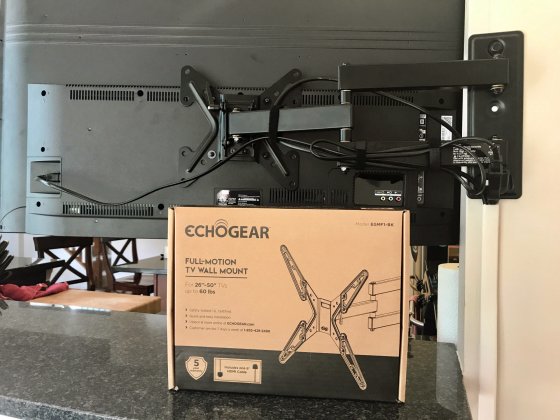 ECHOGEAR had the perfect product for our needs, with their Full-Motion TV Wall Mount that can handle up to 60 lbs and 50″ of flat panel goodness. The television we mounted is 43″ and only weighs 17 lbs, so this mount was more than capable of handling the job. However if you want to swivel a larger and heavier television, ECHOGEAR has solutions for that as well. ECHOGEAR has the top rated TV mounts on Amazon, and is our go-to place for protecting and displaying our prized televisions. Utilize their MountFinder to figure out which products will work with your television. 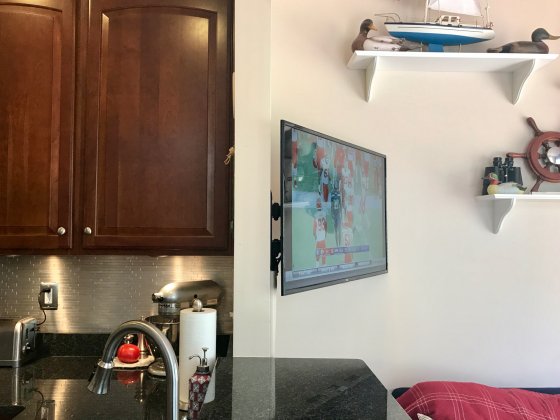 A typical use for the ECHOGEAR Full-Motion TV Wall Mount is when you’d like to mount a TV in a corner, instead of flat on a single wall, similar to what you see above. However we mounted it directly to the stud at the end of a partition wall between our kitchen and sun-room and now that television can be swung so that it can be enjoyed from both rooms. In fact, in a pinch we can even watch that same television from our dining room and deck as well (although a new deck television is definitely in the plans). 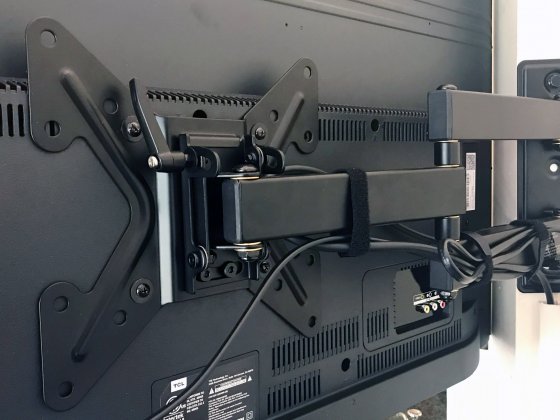 This mount extends and articulates easily, and swivels the furthest of the mounts that ECHOGEAR makes. Installation only took us about 20 minutes, and consisted of 3 main steps : Connect bracket to TV, Mount the wall plate to a stud, and then attach TV bracket to the mount arm. Here we have utilized the 100×100 VESA mounting holes, but the mount is capable of handling up to 400×400 VESA. The ECHOGEAR Full-Motion TV Wall Mount swings our new 43″ television right into the kitchen so that it can be enjoyed from numerous angles in our open layout 1st floor. Now we don’t have to miss a single play, even while cooking! 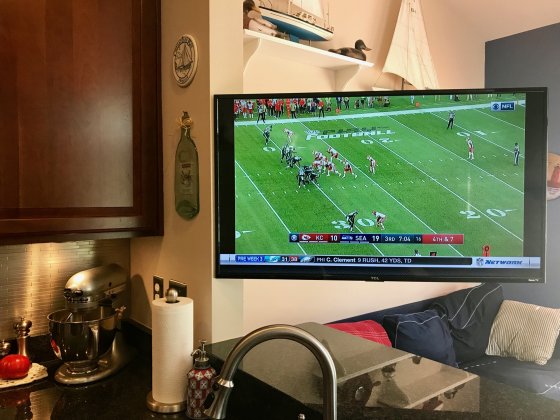 While the swivel mount was perfect for our needs, your Man Cave might call for ECHOGEAR’s Low Profile Fixed TV Wall Mount. This is your more traditional, hang a flat panel television on a wall like a painting scenario, where depth from the wall is one of your primary concerns. We utilized this mount to hang another new television in the bedroom, and installation was just as easy with three simple steps : Attach brackets to your TV, Mount the wall plate, connect TV to the wall plate. Obviously the key here is to make sure you land those lag bolts into a solid stud, but the wall plate is designed to be very flexible to make that easier. 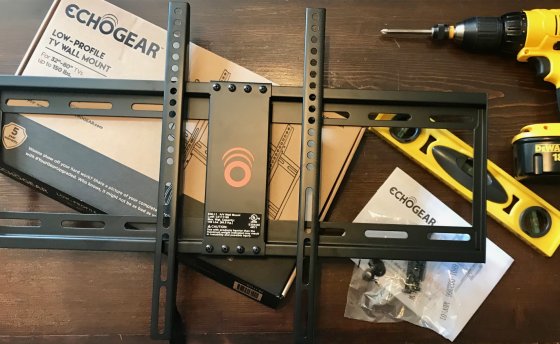 The ECHOGEAR Low Profile Fixed TV Wall Mount is very solid, and can hold up to 150 lbs and 80″ of pure HD bliss. It sits just 1.25″ from the wall and can handle a wide variety of VESA Patterns. We went with another 43″ TV in the bedroom, due to limitations in that space that you can see in the photo below, but soon we’ll be looking to go 4K (and larger) in our basement theater and this mount is perfectly up to the task. When you do your next Man Cave upgrade, we highly suggest you save a little budget to put towards hanging your television properly, so it stays safe and looks great. 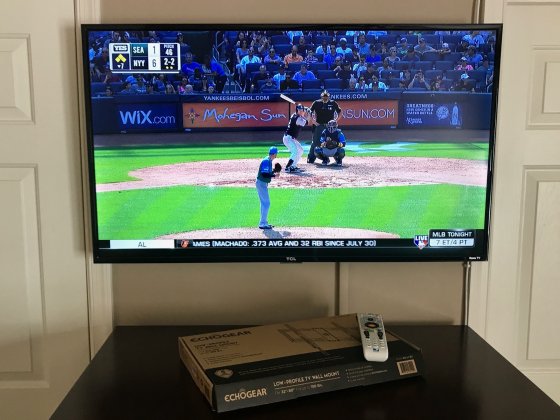 In addition to TV Mounts, ECHOGEAR offers a full line of AV Accessories, AV Cables, and Surge Protectors. For our entertainment upgrades, we utilized their high quality Ultra Slim flexible HDMI cables, which routed easily along their mounts. You may have noticed above that we also utilized painted plastic cable management covers that we picked up at our local hardware store, they really help to make your installation look more professional. Finally we protected our equipment investment with the ECHOGEAR Slim On-Wall Surge Protector with AC Outlets and USB Ports. It offers 540 Joules of surge protection, power stream filtering, and even has 2 USB ports for rapid phone charging. 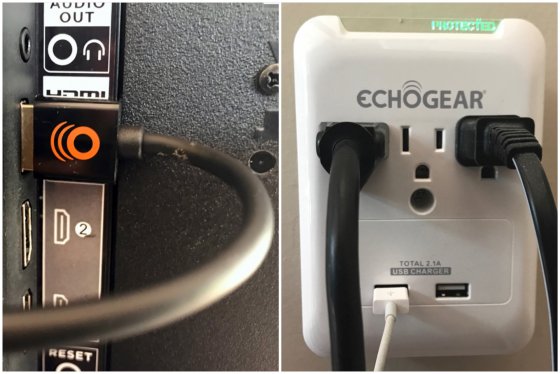