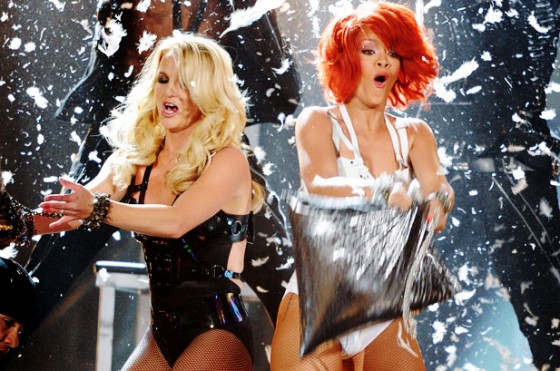 When she’s not being used as a punching bag for Michael Jackson wannabees, Rihanna can often be seen delivering sexually-charged performances at award shows. At last night’s 2011 Billboard Music Awards, the orange-haired songstress opened the ceremonies with a bonerific rendition of her smash hit S&M, which I’m told stands for “sweet and melodic.” *winks eye, nudges elbow*

Joining the leggy crooner on stage was some hag named Britney Spears, who I’m told was a huge pop star a decade ago. This bottle-blonde dinosaur can’t really sing, but she did shake her juicy hiney, straddle a pole and engage in a good ol’ fashioned pillow fight. I dunno about everyone else, but I miss the bloated Britney with bad skin blowing cigarette smoke into her kid’s face. That Britney was awesome.